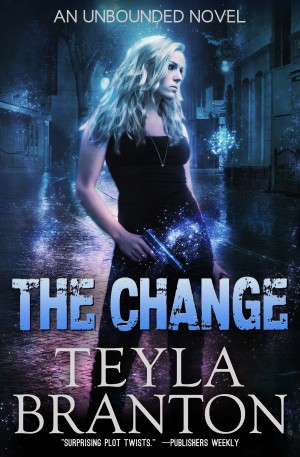 By Teyla Branton
Rated 4.00/5 based on 1 review
There are only two ways to kill Unbounded, and fire isn’t one of them—as law school dropout Erin Radkey learns the hard way. By fluke of a recessive gene, she has become Unbounded, a nearly immortal being with paranormal abilities. More
Death, Life, or Love—Unbounded Always Play for Keeps

There are only two ways to kill Unbounded, and fire isn’t one of them—as law school dropout Erin Radkey learns the hard way. By fluke of a recessive gene, she has become Unbounded, a nearly immortal being with paranormal abilities.

Erin’s Change separates her from her loved ones and alters everything she believes to be true. A week earlier she was considering a marriage proposal; now she contemplates the best way to stay alive. Caught in a battle between two Unbounded groups, the Emporium and the Renegades, she is also hunted by a secret mortal society sworn to eradicate the Unbounded gene.

As Erin plunges into this dangerous new life, she must carve out her own place in the madness, protect her mortal family, and decide which group she should join. Her unique ability is vital to both groups in the race to secure an identification software that spells death for all Unbounded—or enslavement for the entire mortal world. Some will stop at nothing to use Erin as one more pawn in a battle that has spanned centuries. Erin’s undeniable attraction to Ritter Langton, whose family was massacred by opposing Unbounded two hundred and forty years ago, complicates her choices. There are no second chances. Death, life, or love—Unbounded always play for keeps.

Teyla Branton grew up avidly reading science fiction and fantasy and watching Star Trek reruns with her large family. They lived on a little farm where she loved to visit the solitary cow and collect (and juggle) the eggs, usually making it back to the house with most of them intact. On that same farm she once owned thirty-three gerbils and eighteen cats, not a good mix, as it turns out. Teyla always had her nose in a book and daydreamed about someday creating her own worlds. She is now married, mostly grown up, and has seven kids, including a two-year-old, so life at her house can be very interesting (and loud), but writing keeps her sane. She thrives on the energy, inspiration, and daily amusement offered by her children. Grabbing any snatch of free time from her hectic life, Teyla writes novels, often with a child on her lap. She loves guns, martial arts, and belly dancing. Teyla writes urban fantasy, paranormal romance, and science fiction. She also writes romance and romantic suspense under the name Rachel Branton. For more information or to hear about new releases, please visit http://www.TeylaBranton.com.

About the Series: Unbounded

Reviews of The Change by Teyla Branton

When Erin Radkey gets into a fiery car accident that should have killed her, her whole life changes. She learns that she is a sort of super human called Unbounded, and she can only die one way: dissection.
She must let everyone believe she died, and forsake her entire life to follow her new "friends". Ava, who claims to be an ancestor of Erin's. Ritter, which Erin can't help but feel an attraction to. Stella and Lawrence and Dimitri also calling their group the Renegades.
The unbounded are in a fight for survival against another group of Unbounded: the Emporium, and humans calling themselves Hunters which know about the Unbounded.

I liked this book, although it wasn't much of a thought provoking read. The plot was cool, the characters were likable, and the writing style was good.

You have subscribed to alerts for Teyla Branton.

You have been added to Teyla Branton's favorite list.

You can also sign-up to receive email notifications whenever Teyla Branton releases a new book.