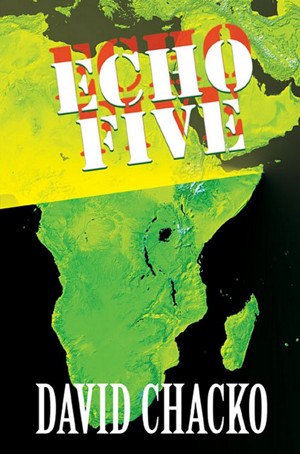 By David Chacko
Echo Five takes place at the end of the world where terror is the norm and the heat arrives from the rim of hell. Jason Ender, who has been assigned to debrief high value terrorists in the Horn of Africa, finds himself caught in a rising tide of violence that begins with the death of a young female interrogator--Echo Five--and ends with the discovery of a plot that threatens to pull the plug on th More
Have you ever wondered about what happens at the secret sites where terrorists are held outside the legal forty-eight?

Echo Five shows what goes on behind the wire. It's more and less than you can imagine, and more than Jason Ender imagines: suicide that may be murder, paydays that may be payoffs, and terrorism that may be the heart of terror.

This is the third Jason Ender novel that began with Less Than a Shadow and continued with The Peacock Angel.

A lot of what a writer does at the desk is the result of research being plugged into what happened every day of his life up to that point. Where he's born doesn't mean a lot except that's part of what he brings to the work. So let's say I was born in a small town in Western Pennsylvania where the coal mines closed thirty years before, then let's say that I found my way to New York and Ohio and New England and Florida and Istanbul with lot of stops along the way.

I don't remember much about most of those places except that I was there in all of them and I was thinking. One of the things I was thinking about, because I'm always thinking about it, is the way people and governments lie to themselves and others. Those two thing--the inside and the outside of the truth--might be the same thing, really. That place of seeming contradictions is where I live. And that's where every last bit of The Satan Machine comes from.

The lies piled up around the attempted assassination of the pope like few events in the history of man. Most of it had to do with geopolitics, especially those strange days when the world was divided into two competing blocs that were both sure they were right in trying to dominate. So an event that was put through the gigantic meat grinder was one that would be mangled nearly forever.

That's what I've been thinking about--the hamburger, so to speak. The results will be told in several blog entries from my website, so you might want to mosey over to www.davidchacko.com. I can guarantee you a good time.

You have subscribed to alerts for David Chacko.

You have been added to David Chacko's favorite list.

You can also sign-up to receive email notifications whenever David Chacko releases a new book.