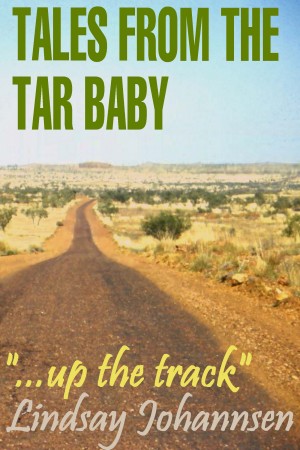 Tales From The Tar Baby "...Up The Track"

By Lindsay Johannsen
Rated 5.00/5 based on 2 reviews
Being memories and observations from selected events and personal experiences gathered during trips from Alice Springs to Darwin over one's lifetime, fifteen hundred K's from the Red Heart to the Top End – most recently in our retirement motor-home Tar Baby. How boring, thinks you. And so did I at first, but as I started writing I began to remember things, some recent and others from my childhood…
Download: epub mobi (Kindle) pdf more Online Reader
rtf lrf pdb txt
Price: Free! USD
Add to Library
Create Widget
Tags: remenisences road adventures
About Lindsay Johannsen

There's not a lot to tell really, though on reflection, looking back on it through the lens of one’s recollections and memories, the whole business seems more akin to an extended Huckleberry Finn adventure, but set in the vastness of Central Australia.

Born, raised and schooled in Alice Springs; taken from the leafy glades of learning mid-way through Year-eight to work at my father's remote little copper mine; later employed for some years driving his cattle-hauling road trains – him having pioneered road trains and the cattle hauling business (see "Kurt Johannsen: A Son of the Red Centre").
Married in the fullness of time; built a bush homestead on the northern edge of the Simpson Desert and raised a family there, all while running a small tungsten mining business and provisioning the hundred or so Aboriginal people local to the area who adopted us.
Sold our mine and homestead a few years after the kids had flown the coop, acquired a forty foot (12m) touring coach, converted it into a big steel-wheel mobeel Palaise-de-passion motor home and took to the roads of this great land of Oz - in the main visiting our offspring (most of whom had moved to coastal regions), our grandchildren generally and a couple of great grandies - plus various friends and associates from years gone by.
Then, as time went by, my Bride my Precious Lamb and Flower of the Early Mid Morning contracted dementia and, after a period of steady but inevitable deterioration, she passed away from its effects aged 85 - in June 2018.
I don't write much any more, but I did convert a short fictional love poem written earlier into a summary of it all - our meeting, our life together and my current state of mind ... in 200 words.
"Life Sentence" it's called. It's in the list below. Please feel free to read it, with my compliments.
L.J.

About the Series: Tales From The Tar Baby

This is a partially illustrated travelogue series of sorts, Dear Reader, wherein I describe some of our travels and adventures in the motorhome Tar Baby. I feel obliged to warn you, however, that it comes with all of the free-ranging reminiscences, observations, comments and asides that came to mind as I wrote - the majority of them relevant but others a little less so. Some are drawn from events recent and some from earlier lifetimes and journeys, while others are simple reflections on life's grand adventure and the universe in general.

And, being a seasoned traveller yourself, you will recognise at once which of the pictures I paint are fair-dinkum honest-to-God "Struth!!!", which of them are slightly less so, and which have been spiced with the salt of irreverence or a modicum of lunacy - as the whim will have taken me. And if you've ever been taken by a whim, mon ami, you'll know exactly what to watch for.

So come join us. Fill your glass and let me show you where the winds of fate have taken us, all full of joi-de-vrie so to speak (or whatever it says on the empties), our faces turned to the dawn of a bright new day.

I wrest my case.

Also in Series: Tales From The Tar Baby

Fantastic book. My sister did that trip about 8 years ago, her only visit to Australia. Drove from Adelaide to Darwin in a mini bus she bought cheap, broke down once, waited two days for spare parts and sold the mini bus back in Adelaide before she got back on the plane. Got the same price she paid for it.
She still talks about it and says it was the best trip of her life.
This was a great read for me.

5 out of 5 for this super eBook

(review of free book)
Anita Hasch reviewed on April 22, 2015
(no rating)
Super book about traveling the outback in a converted bus. Super pictures of the outback. Really enjoyed this eBook.

You have subscribed to alerts for Lindsay Johannsen.

You have been added to Lindsay Johannsen's favorite list.

You can also sign-up to receive email notifications whenever Lindsay Johannsen releases a new book.