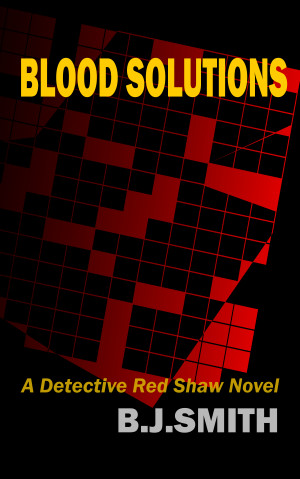 Shaw had seen a lot of nasty business in his time with Des Moines PD, but the grisly slashing of an old man one night on the street was among the worst. The victim had been horribly mutilated, a crude crossword puzzle grid slashed into his skin along with an ominous, bloody clue.

Known as “Red” to a select few, Ed Shaw knew right away that the case was going to be like nothing he’d worked on before. It didn’t help that his longtime partner, Phil Vega, was on medical leave with a bum leg, that his ex-wife Sally had finally moved on, and that he’d gotten drunk just hours before being called to the first crime scene.

Shaw did his best to get along with the brash assistant county attorney who was assigned to the case, and he relied on the counsel and expertise of Dr. Paul “Penny” Penawalt despite the medical examiner’s smartass attitude.

He and his wife, Susan, live in Grand Junction, Colorado. They enjoy bicycling, hiking and snowshoeing in the mountains.

About the Series: Detective Red Shaw

The Detective Edward "Red" Shaw novels offer what's been called "a fascinating window into an otherwise forgotten corner of the American Midwest. Des Moines in this series is neither the boring insurance town it used to be, nor just the hipster paradise it's become, but a gritty frontier town where no one is who or what they seem." Another reviewer described Shaw, the protagonist created by a former Iowa daily newspaper reporter, as "a neat balance between the hard-boiled detectives of past noir thrillers (think Sam Spade) and the somewhat less cynical, less worldly, but no less intelligent and capable detectives of more modern fiction."

Review
Linda Strong reviewed on March 29, 2016
(no rating)
A detective with the Des Moines, Iowa Police Department, Ed Shaw has a full plate. On the personal side, his long-time partner is on medical leave, his ex-wife is moving on, and he got drunk the night before being called to a brutal crime scene. Needless to say, a lot of eyebrows were being raised as he had to rush away before he contaminated said crime scene.

Somebody is loose on the streets that really likes using a knife. First an old man walking his dog is brutally mutilated (and the dog stabbed). The only clue the police have is carved into the man's back. It's a crossword puzzle clue. And this is not the only body found.

And what do these deaths have to do with a killing that took place many years previously?

Working with the best available people he know, Shaw is depending on the medical examiner and the County Attorney. He's not even above manipulating a journalist to get what he wants/needs to solve this case.

But there's a lot going on behind the scenes. A psychologist has a client that 'thinks' he may be the killer, even though he doesn't actually remember doing the killing. The psychologist has an internal battle trying to decide if he needs to go to the police. The County Attorney is having an affair .. and his girlfriend has just announced that she's pregnant. The Attorney's wife and father-in-law ( a well-known judge ) are not going to be pleased.

I liked that the book gave a back story to all these characters. Trying to decide who did what to whom was fun ... and not easy. I rather like the challenge of not automatically knowing. The ending was sort of a surprise. The opening chapter was an eye-opener ... grabbed my attention in a heart beat. Slowed down a little in order to introduce the characters fully, and from there it was a fast-paced thriller.

Many thanks to the author who provided a digital copy in exchange for an honest, unbiased review.

This thriller will keep you on the edge of your seat as you follow Red Shaw on his quest to solve some grisly murders. Smith creates character with depth whose interlinked lives are all affected by and implicated in the killings that take place in their city. The story pulls you in with its well-written and connected narrative threads and won't let you go until the mysteries have been solved. Enjoy!

Red Shaw has a problem. A Des Moines-sized problem that's a microcosm of all those unsolved murders out there, scattered around the UK and the US and Canada and points unknown. I'm a new fan of Red Shaw and I desperately want him to solve this particular problem before any more innocent parties are murdered. Will he or won't he? Read "Blood Solutions" and find out!

You have subscribed to Smashwords Alerts new release notifications for B.J. Smith.

You have been added to B.J. Smith's favorite list.

You can also sign-up to receive email notifications whenever B.J. Smith releases a new book.