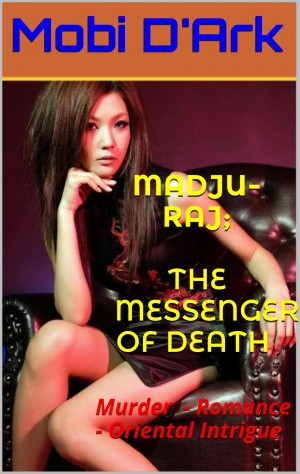 Madju-Raj: The Messenger of Death.

Set partly in England, partly in Thailand, "Madju-Raj" is the story of a young Englishman and a beautiful Thai woman who meet in rural England. Together, they set out to solve some horrific murders which result in many exciting escapades - on both sides of the world. The tale swings from comedy to tragedy; and the romance, violence, and oriental intrigue will keep readers glued to the final page. More
Set partly in England and partly in Thailand, the story commences in a tiny, poverty-stricken village, deep in the heart of rural Thailand where two innocent youths are mercilessly shot. The action then switches to a sleepy village in the English countryside, where an elderly Englishman is brutally murdered in his own home.

Are the two crimes connected?

Perry is a shy, young, struggling author who lives in the picturesque English village of Fawnhope and becomes captivated by Suneenart – Sunny – a young Thai woman who comes to live in his village. She is the most beautiful woman he has ever set eyes on, but her capricious and enigmatic nature mean that his clumsy attempts to woo her are continually frustrated.

A second murder and the apparently motiveless trashing of Sunny's house prompts the pair to team up and try to solve these unexplainable crimes.
Their inquiries take them from England’s ‘green and pleasant land’ to the lawless slums of Hat Yai in the south of Thailand. From there, the action moves to the opulent Oriental Hotel in the heart of Bangkok and thence to the wild-west of ‘Issan–country’ in the north east, where the ruthless authorities still exact summary justice.

Their adventures lead to many life-threatening escapades, both in Thailand and back home in England. With Perry’s help, Sunny slowly pieces together the intriguing jigsaw of events that led to the murders.

Along the way, Perry learns some uncomfortable and disturbing truths that lie beneath the surface of Thailand’s thin veneer of civilised society and the democratic ideals that they love to espouse.

Not without humour, the tale swings from light-hearted banter to dreadful tragedy and ultimately to poignant sadness, as we learn about the past tragic events that have helped to shape the lives of the main protagonists.

Mobi D'Ark was born in 1946 in Hampshire, England and grew up in post-war, economically depressed East London/Essex. He left school at the age of sixteen to become an accountant and had a 40-year career in the world of global finance.

During this time he lived and worked extensively abroad, primarily in South East Asia, West Africa, The Middle East, and North America. He concluded his career back where he started - in the City of London.

Taking early retirement in 2,000, Mobi turned his hand to his first love, creative writing, and over the following 14 years, he has written a collection of six Thai-based novelettes, a children's novel, a crime novelette based in the Middle East and three full-length novels, two of which are mainly based in Thailand, and the third in Nigeria.

Mobi is a much-wedded world traveller and has been caught up in many sensational adventures. These include a bloody civil war; a kidnapping; high-level corruption; a murder or two and a few other foolhardy escapades which on occasion, have caused him to spend several brief spells in third-world jails.

Much of his writing is based on these personal experiences.

After living overseas for many years, Mobi returned to the UK in 2017 and now lives in Rutland.

Reviews of Madju-Raj: The Messenger of Death. by Mobi D'Ark

You have subscribed to alerts for Mobi D&#039;Ark.

You have been added to Mobi D&#039;Ark's favorite list.

You can also sign-up to receive email notifications whenever Mobi D&#039;Ark releases a new book.