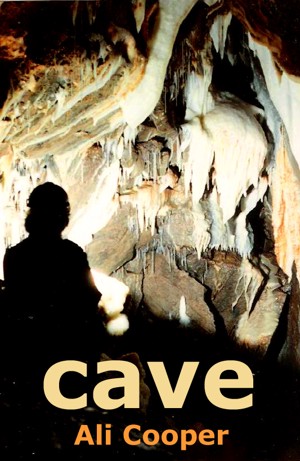 Rated 5.00/5 based on 3 reviews
Marty is trapped down a cave beneath the Welsh mountains. Will his life begin at forty – or will it end?

Cave is a coming of age adventure, spanning twenty years of friendships and relationships. Set in Wales at the turn of the millennium. More
Marty is trapped down a cave beneath the Welsh mountains. Will his life begin at forty – or will it end?

Newly single and reunited with old friends from university, Marty finds life is no longer as idyllic as his memories of hot summers, music festivals and recreational drugs. He is persuaded to resume his hobby of caving, and, while twisted relationships play out on the surface, he descends into the strange and beautiful world of caverns and stalactites, where ghosts from the past are waiting to haunt him. But the others have secrets too - and as they are revealed, Marty unknowingly walks into danger.

Cave is a coming of age adventure, spanning twenty years of friendships and relationships. Set in Wales at the turn of the millennium.

I'm a singer/songwriter/guitarist and I teach guitar.

I currently live in rural Devon - came here for the solar eclipse and stayed!

I have degrees in psychology and archaeology (I'm already published in archaeology non-fiction) and these subjects tend to crop up in my writing.

The Girl on the Swing is my first novel to make it into print. It's published by Standing Stone Press in association with Year Zero Writers collective. It's also available in print with Amazon, B & N, Waterstones etc in US and UK.

Reviews of Cave by Ali Cooper

I found this book a real page turner. It kept me enthralled from the first page. Anyone who reads this book will not be disappointed.
I found myself reading late into the night as I wanted to know what happened! The story and characters kept returning to me during the day.Congratulations to the author on an excellent book.
I will certainly be keeping my eyes open for the author's next book.

I often hear books called "page turners" but I really need a stronger description for this book. I am usually a very "responsible reader" only reading during my work-day breaks and after all my work is done at night. But from the instant I opened this book, I had to argue with myself to stop reading, my lunch hour turned into two hours. Finally, I took a day off from work to finish it - I could NOT concentrate on my work, I just HAD to get back to the book.

I have recommended this book to everyone I know and I plan to continue doing so. The book is extremely well crafted. And, as another reviewer said, it just keeps dishing out unexpected twists. The location descriptions make me (a claustrophobic and serious chicken) want to go underground!

The beautifully painted scenes in Cave are truly worthy of being called literature and the story is strong and compelling. Try it, you won't be sorry!

Cave is an intriguing and unusual novel, with vividly portrayed and believable characters, and a plot that keeps you guessing to the end.

I would describe it as a mystery adventure. At the beginning, the protagonist, Marty, finds himself trapped in a deep cave in North Wales and left to die. The action revolves around Marty’s attempts to find a way out, alongside flashbacks that introduce readers to the other people in his life. Through these, we gradually piece together what has happened to Marty and who has tried to kill him (and why).

Marty is a flawed individual with a few skeletons in his closet. He nevertheless captures the reader's interest, if not always our sympathy. Through the flashbacks we find out about his relationships with the two women in his life, his estranged wife Carole and university girlfriend Beth. We also meet his circle of (mostly male) caving buddies, some of whom have surprising secrets of their own. The majority of the novel is actually set above ground, focusing on Marty's job as a forensic chemist, his student days, his return to single life (and his old hobby of caving), and other trips and expeditions he has undertaken.

Although self-published, Cave has been written and edited to a professional standard. It’s not an all-out action adventure (though there certainly are some dramatic scenes in it), but rather a novel about people and relationships, secrets and regrets. As such, it should appeal equally to both male and female readers. In my opinion, it would also make an excellent movie. Highly recommended for lovers of intelligent fiction.

You have subscribed to alerts for Ali Cooper.

You have been added to Ali Cooper's favorite list.

You can also sign-up to receive email notifications whenever Ali Cooper releases a new book.