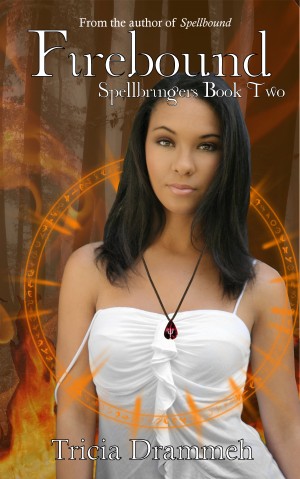 By Tricia Drammeh
A new threat comes to Oaktree in the form of a dark enemy from the Alexanders’ past. Rachel lies to protect her family, but when her secrets are revealed, she alienates the people who are sworn to protect her. Alisa and Bryce are willing to stand by her, but they have problems of their own. As the darkness in Bryce spreads, Alisa might have to make the ultimate sacrifice to save him. More
Rachel's thirst for knowledge about the family she never knew drives her to keep a secret from the Alexanders that shatters Jace's trust in her. With her renewed dream-relationship with Re'Vel, she walks a razor's edge, putting the entire Alexander family - and Alisa - in terrible danger.

Alisa and Bryce are more in love than ever, but his jealousy and possessiveness threaten to push Alisa away. With his Claiming Words ringing in Alisa's ears, she tries to reconcile her sense of independence with her desperate yearning for Bryce.

A dark enemy from the Alexanders' past is out for vengeance and uses Rachel as his target to get to the family he despises. When Alisa is caught in the crossfire, Bryce is willing to sacrifice anything to save her - even his own soul.

Tricia Drammeh is a wife and mother of four children who lives in New Hampshire. Her published works include The Fifth Circle, The Seance, Better than Perfect, and the Spellbringers series. She is currently working on her ninth novel. When Tricia isn't writing, she can be found walking her dog through haunted graveyards, devouring books, or drinking vast amounts of coffee.

Spellbringers is a multicultural fantasy series for young adults. It follows Rachel, a girl with a secret past and shocking destiny, and Alisa, a human girl who proves it isn't necessary to have magic to be special. It also follows the Alexanders, a magically gifted family who have been sent to protect Rachel. Their sons, Bryce and Jace, become involved in Alisa's and Rachel's lives, changing both girls forever.

In Spellbound: Book One, the Alexanders come to Oaktree to confront the dangerous forces brewing in the small town. Rachel and Alisa have never been friends, and it isn't easy for them to suddenly find their lives intertwined. When both girls fall in love with the same guy, the results are completely unexpected.

Unbound is the explosive third book in the series. New loves are found and lost, and a devastating secret is revealed.

Book Four and a prequel to the series are slated for release later this year.

You have subscribed to alerts for Tricia Drammeh.

You have been added to Tricia Drammeh's favorite list.

You can also sign-up to receive email notifications whenever Tricia Drammeh releases a new book.