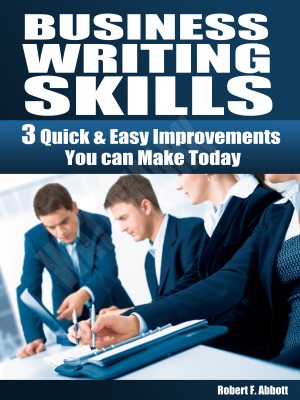 By Robert F. Abbott
Make your messages easier to read, more persuasive, and more effective. In less than an hour, you'll learn three quick and easy techniques that will improve your writing today. Your letters, memos, and email messages will stand a much better chance of being read, being understood, and getting results. Increase the odds readers will think or behave the way you ask. More
Better Writing. Better Results.
This booklet aims to get you better results from your written messages, more influence over the thoughts and behaviors of your readers.

And it makes learning quick and easy.

Quick:
* Focuses on just three key techniques.
* Lots of examples to illustrate the techniques, plus practice docs.
* Reading time of less than an hour, plus an hour's practice and you're ready to go.

Your messages will be:
* Easier to read.
* More persuasive.
* More effective.

Plus, you'll find resources that help you write and help you measure your writing progress.

Business Writing Skills: 3 Quick & Easy Improvements You can Make Today gives you the essentials and nothing more. Just the three techniques, examples of their use, and short practice documents.

Robert F. Abbott is a veteran writer and publisher who specializes in business communication. He is the author of A Manager's Guide to Newsletters: Communicating for Results (Word Engines Press, 2000) and has written numerous booklets and articles that appeared in his weekly online newsletter, Abbott's Communication Letter, between 2000 and 2006. Earlier, he operated The Newsletter Company, which wrote and published custom newsletters for companies in a number of different industries. In addition, he's been a radio news writer and announcer, a farmer, and a construction worker. He lives in Airdrie, Alberta, Canada and actively participates in the management and operations of non-profit organizations.

You have subscribed to alerts for Robert F. Abbott.

You have been added to Robert F. Abbott's favorite list.

You can also sign-up to receive email notifications whenever Robert F. Abbott releases a new book.