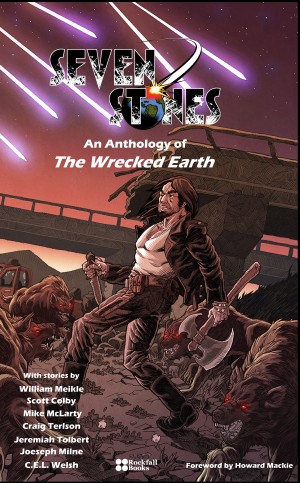 Seven Stones: An Anthology of The Wrecked Earth

In this world seven writers were invited to play, to create their own tale of a meteorite and how it affects the subject of their story.

THE STORIES
The beauty of Seven Stones is in its diversity of talent. Each writer brings a different vision and style to the project, and each has a different background. The lineup includes short story and novel writers, comic writers, and screenplay writers. Their specialties are high fantasy, adventure, western, science fiction, mysteries—and of course the post-apocalyptic!

Christopher Edward Lee Welsh was born the son of a soldier and weaned on Japanese television and classic Rock n Roll when it was just Rock n Roll. His first encounter with the fantastic in books was George MacDonald, given a boost by C.S. Lewis, and locked down forever by J.R.R. Tolkien. He knew he was going to be a writer by age 9. He did not know that it would take him twenty years to get there. He writes and publishes books under the name C.E. L. Welsh, because if you have four names and you are a writer you are legally obligated to use all of them.

His published works include Graphic Novels (Harry Houdini, Space Race) by Campfire Comics, short stories (Shiver, A.I. Trigger), novellas (Tubifex, Coffeyville), and his debut novel, CLUTCH: Book One of The Wrecked Earth, published in 2012 by Rockfall Books. His other writing credits include many supplements (Aliens: The Ruthdii for Precis Intermedia, Villains – The Brotherhood of Mahlik for Dog Soul Publishing) and stories (Techi’s Solution, Walk of Swords for Noumenon by Abstract Nova) written for the Role Playing Game industry.

His daily life is spent chasing down the Muse with a rusty crowbar when he is not analyzing software for defects or annoying his wife and children with magic tricks and Kung Fu demonstrations.

Chris is currently writing SUNDER: Book Two of The Wrecked Earth, for publication in the winter of 2014. 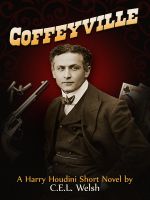 Reviews of Seven Stones: An Anthology of The Wrecked Earth by C. E. L. Welsh

Would you like to favorite C. E. L. Welsh?

You have been added to C. E. L. Welsh's favorite list.