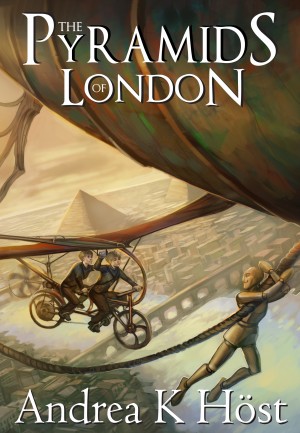 The Pyramids of London

But the peace of recent decades is under threat. Rome's automaton-driven wealth is waning along with the New Republic's supply of power crystals, while Sweden uses fear of Rome to add to her Protectorates. And Prytennia is under attack from the wind itself. Relentless daily attacks destroy crops, buildings, and lives, and neither the weather vampires nor Prytennia's Trifold Goddess have been able to find a way to stop them.

With events so grand scouring the horizon, the deaths of Eiliff and Aedric Tenning raise little interest. The official verdict is accident: two careless automaton makers, killed by their own construct.

The Tenning children and Aedric's sister, Arianne, know this cannot be true. Nothing will stop their search for what really happened.

Not even if, to follow the first clue, Aunt Arianne must sell herself to a vampire.

About the Series: The Trifold Age

A world where gods have Answered.

Also in Series: The Trifold Age