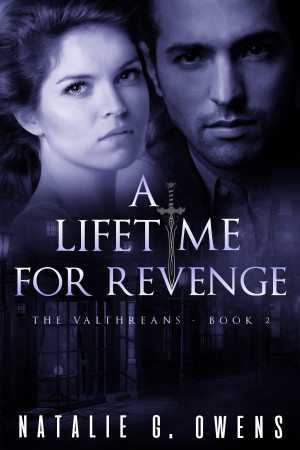 A Lifetime for Revenge (The Valthreans: Book 2)

Rated 4.50/5 based on 2 reviews
After exacting revenge against a lifelong enemy, Massimiliano (Max) Damiani is sent by the Valthrean Council to investigate the mysterious death of one of their Councilmen. Duty bound to protect the victim's daughter and her young brother, the stakes are upped as Max and those around him become targets of a dangerous enemy. More
Keeping it simple doesn't always work out so well…

After exacting his longed-for revenge, Massimiliano “Max” Damiani’s life is about to get more complicated when he is sent by the Valthrean Council to investigate the mysterious death of one of their Councilmen. Duty-bound to protect the victim's daughter and her young brother, the stakes are upped as Max and those around him become targets of a dangerous enemy. The Cult is closing in, threatening the future of their kind.

Fate is a cruel mistress…

Piper Ingram’s existence is thrust into turbulent waters. Her father has been murdered in cold blood and she is now sole guardian to her little brother, Charlie. After years of helping others come to terms with their problems and move on to better lives in a domestic violence shelter, she now needs help protecting herself and her kin.

Salvation comes when we face our deepest fears…

Max values his independence above anything. Meanwhile, this case brings him more trouble than he's bargained for, pushing his limits, and testing his fear of commitment. While striving to keep his personal demons at bay and holding on to his set ways, he fights his attraction to Piper, but he fast learns some things are not within his control. Will he save those entrusted in his care this time? And most importantly, will he finally find redemption ... and love?
---------*********---------
This novel is a paranormal romance with historical romance and romantic suspense undertones. The Valthreans series contains sexy heroes, strong heroines, intriguing immortals, magic, spells, mystery, amazing adventures, exotic settings, secret cults, and sensual love scenes. All novels in this series can be read as stand alone books.

Pink velvet and black lace. Light and darkness. A world of contrasts exists in Natalie’s stories because every rose has its thorn. Her favourite stories to write are romances with a dark edge featuring brooding heroes, strong heroines, an intriguing mystery, and a good dash of fantasy.

Married, with one son, she now calls the beautiful island of Malta home after eleven good years in Atlanta, GA. As a professional editor and author, her days are always busy, but when she’s not working—or muttering to herself about her book plots like a batty old maid—she enjoys spending time with family and friends (both online and offline), sipping on a good shiraz, reading, cooking and entertaining, watching a good movie, travelling, and ogling shoe store displays. Most of all, she loves to meet and communicate with other authors and readers.

Find out more about Natalie’s latest news and works in her monthly newsletter – http://eepurl.com/povjf

You can also find her here (she’s waiting to make new friends!):

About the Series: The Valthreans

The Valthreans is a paranormal romance series featuring a good dose of suspense, intriguing immortals, magic, spells, mystery, amazing adventures, exotic settings, and secret cults. All novels in this series can be read as stand alone books.

Also in Series: The Valthreans

Reviews of A Lifetime for Revenge (The Valthreans: Book 2) by Natalie G. Owens

Max Damiani is a strong man with a checkered past and proud of it. He avenged his sister’s death the only way he knew how and although he is not proud of the methods he had to employ, he suffers no remorse for executing the deed. Used to being the problem solver everyone calls upon, he suddenly finds himself in the precarious position of having to protect a woman and her young brother. This is his worst nightmare come true as the boy reminds him too much of his sister and the woman pushes all the wrong—or is it the right?— buttons.

Piper Ingram is used to protect other people at the shelter she runs. Now she has to submit to being protected by a man who made it clear that he would rather be anywhere else, doing anything else, rather than being charged with the responsibility to protect her and her brother. To top it off the only safe place seems to be Max’s house.

So the stage is set for a tale of modern romance laced with enough suspense to keep your eyes glued to the pages. Several undercurrents of evil run simultaneously only to converge under the expert hands of the author.

Unlike the first book in the series (An Eternity of Roses) this book takes place in the present time only. This story illustrates how love can overcome sadness and hatred and how it can provide courage when you thought you had none.

Once again this is not a quick read and readers should expect to spend some time enjoying the characters Ms. Owens so expertly created. It is a book filled with razor-sharp imagery and on-the-button descriptions of inner conflict. Most of all it is a book that will leave the reader with sense of satisfaction when the last sentence is read.

Definitely a book I would recommend for readers of paranormal romantic suspense.

amazing book - tremendously engaging. The descriptions are vivid and lush. The plot was tautly woven with surprises around every corner. This was definitely a first rate read.

You have subscribed to alerts for Natalie G. Owens.

You have been added to Natalie G. Owens's favorite list.

You can also sign-up to receive email notifications whenever Natalie G. Owens releases a new book.