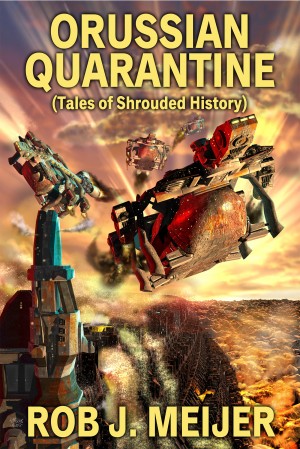 Rob is a software-engineering professional who pays his bills by building computer forensic and information security products.

Rob's first two shorts are an homage to the memory of his father an atheist who entertained let’s say rather SciFi-ish ideas about the origin of man. During a 6-week stay in west Africa, the soaring heat combined with the tiny ants that kept infesting his apartment and local customs helped Rob find the inspiration for turning what he remembered from his father’s wild theories into a coherent SciFi story. Since then Rob has continued to work on a series of shorts with related subjects that he hopes to one day release as a printed bundle.

While Rob loves both technology and his e-books, he feels a big draw to the idea of holding a self-published book in his hands and feeling and even smelling the reality of it. His ultimate goal is thus to self-publish a bundle of seven shorts that he can hold in his hands and smell ;-)

About the Series: Tales of shrouded history

What if parts of our history are shrouded. What if scripture and mythology lift a tip of the shroud? What could our history have been like and what impact will that have on our future?. Each of the eventually seven stories in this series will answer these questions in its own distinct way.

This is a story we are told, not shown, a bit in the fashion of Doris Lessing's sci fi (unfortunately, I don't like that style, so this is not a compliment). There are a lot of clever acronyms, but the technology and planet are finally given short shrift. Characters are introduced in detail about their looks and position, but then they don't seem to *do* anything. The Orus star system is covered in bewildering detail, lots of planets with names and alternative names, but then nothing else, really.

And when a 'water world' turns out to be nothing more or less than a giant fish tank, I just gave up. That's not how water worlds are. There are other physical impossibilities, too. Sometimes, you forgive them if the rest of the story carries you with it, say, emotionally or with a moral question. There is a moral question or two, but it's skirted and never tackled.

Sorry, Rob J Meijer, it's a lot of detail, as if a bigger story is about to jump out at you, but it never does. There isn't any character whom I can remember, just two days later. A potentially nice concept, but it didn't get a good treatment.

It tells of a the gradual collapse of a planetary system. We get a series of events that give us glimpses into the big story. A genetic engineer, a terraformer and a fallen rebel all take turns to give us their viewpoints.
It is a demanding read due to the density of the explanation. It works well if you think of it as a set of testimonies within a historical text. The world-building is good and I would have liked to read more.
You will recognise the story and the characters, though perhaps not at first. My favourite was definitely the rebel; making him a freedom fighter is not entirely original but making him a senator who over-reached is nicely done.

This sci-fi story about genetic engineering was interesting. About half way through I started to wonder where the “hybrids” would end up and whether the story was in the past or future. My one criticism of this book is that I found the writing very dense, it read like a distillation of a novel into ten thousand words.

(reviewed the day of purchase)
Michael reviewed on March 4, 2015

Every now and then you meet a book that’s hard to rate on the one to five star scale. This is one of them. In the end I settled on four, because I liked the ideas the story presented. It has a solid plot and plenty of imaginative ideas. It’s like a mind-altered infusion of out-there sci-fi with a David Attenborough documentary. Examples... well, the story centres on genetically engineered ant-monkeys, breaking the bonds of slavery, in a galaxy far away... need I say more? Perhaps, but I won’t because I’m not a fan of spoilers in reviews.

But it’s brief for that volume of material. I felt like I was reading an extended synopsis. There’s a load of ‘other civilisations, planets, technologies, and associated history’ packed into ten thousand words. For my taste, big ideas need a big word count, so I felt this book could sustain being ten times the length. Ah, but in saying that, every reader is different, and I do like to get lost in a book.

You have subscribed to alerts for Rob J Meijer.

You have been added to Rob J Meijer's favorite list.

You can also sign-up to receive email notifications whenever Rob J Meijer releases a new book.