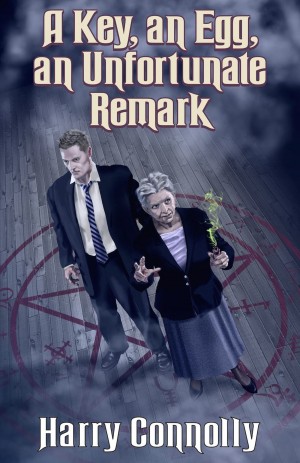 A Key, an Egg, an Unfortunate Remark

By Harry Connolly
This pacifist urban fantasy, set in Seattle, by the author of the Twenty Palaces series features a sixty-five year old protagonist who is a cross between Auntie Mame and Gandalf. More
A MYSTERIOUS KILLING

After years of waging a secret war against the supernatural, Marley Jacobs put away her wooden stakes and silver bullets, then turned her back on violence. She declared Seattle, her city, a safe zone for everyone, living and undead. There would be no more preternatural murder under her watch.

But waging peace can make as many enemies as waging war, and when Marley's nephew turns up dead in circumstances suspiciously like a vampire feeding, she must look into it. Is there a new arrival in town? Is someone trying to destroy her fragile truce? Or was her nephew murdered because he was, quite frankly, a complete tool?

As Marley investigates her nephew's death, she discovers he had been secretly dabbling in the supernatural himself. What, exactly, had he been up to, and who had he been doing it with? More importantly, does it threaten the peace she has worked so hard to create? (Spoiler: yeah, it absolutely does.)
Available ebook formats: epub
Price: $3.99 USD
Buy Add to Library Give as a Gift
How gifting works
Create Widget
Tags: vampires urban fantasy ghosts murder mystery humor seattle dragons werewolves spells light fantasy
About Harry Connolly

Reviews of A Key, an Egg, an Unfortunate Remark by Harry Connolly

You have subscribed to Smashwords Alerts new release notifications for Harry Connolly.