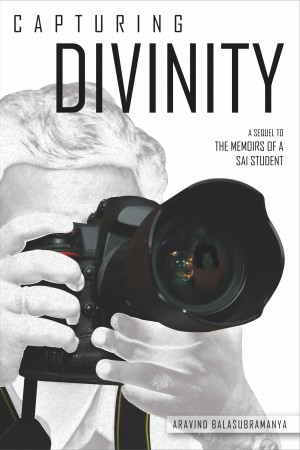 By Aravind Balasubramanya
Rated 5.00/5 based on 1 review
This book is a collection of divine moments – moments that arose at the most unexpected times and in the most beautiful ways to assure him that his beloved Bhagawan always has him in His sight. More
In a discourse on 22nd April, 1998, in the hills of Kodaikanal, Bhagawan Sri Sathya Sai Baba made a revelation about an aspect of God.

“The photographer asks you to be ready when he snaps your picture and he gives you time to ready yourself. But, the Divine Cameraman will not give you any notice. You should always be ready to meet the situation. If you engage yourself in bhajan and daivachintanam (thinking of God) – keerthanam and smaranam (singing and remembrance) – you will not be caught unawares.”

The Divine Cameraman wants us to appreciate and love His uncertainty. The prerequisite for seeking the Lord who is ever compassionate is to be ever ready and that is something that the author realized as he graduated from Swami’s educational wing into His service wing. One has to be alert always, because things can ‘click’ at any time; there can be a ‘flash’ of inspiration during any hour of the day and though situations appear to have been captured in a ‘negative’ way, they can quickly be ‘developed’ into the ‘positive’ to fill one with beautiful memories.

It was an honour, a privilege, and a boon from the highest heavens in fact, that Aravind got the chance to be His cameraman for a few years. However, that did not reverse the roles with respect to readiness. Aravind had to be alert at all times and be ready to “meet the situation” as Swami puts it. He confesses that he has not been alert all the while, but whenever he was alert and sincere, an experience with the Divine unfolded. This book is a collection of such moments – moments that arose at the most unexpected times and in the most beautiful ways to assure him that his Beloved Bhagawan always has him in His sight.
Available ebook formats: epub pdf lrf pdb html
First 20% Sample: epub lrf pdb Online Reader
Price: $3.00 USD
Buy Add to Library Give as a Gift
How gifting works
Create Widget
Tags: bhagawan bhagavan bagawan bagavan sathya satya sai baba aravind arvind arwind balasubramanya balsubramanya balasubramanian balsubramanian time with god transform teach guide bless capturing divinity experiences account radio sai employee memories speech speaker programme radio sai media foundation prasanthi nilayam puttaparthi
About Aravind Balasubramanya

Aravind Balasubramanya hails from a family that has been devoted to Bhagawan Sri Sathya Sai Baba for nearly half a century. His father was a photographer of Bhagawan in the late sixties and early seventies in Brindavan and many of the old black and white photographs we see of Swami have have been through his lens.

Inspired by his parents, especially his mother, to spend his life with his Swami, Aravind joined Sri Sathya Sai Vidyapeeth in Calicut, Kerala for his primary education. He joined Sri Sathya Sai Higher Secondary School in Prashanti Nilayam for high-schooling. He followed it with a Bachelors in Science with specialization in Chemistry from the Sri Sathya Sai Institute of Higher Learning for which he secured a gold medal. He continued to complete his Masters in Science (Chemistry) and with the desire to stay with Bhagawan went on to do his Masters in Business Administration (MBA) too.

It was in the Institute that he got several opportunities to speak in the Divine Presence, act in many presentations and plays and also pursue photography which he picked up from his father. He was careful in recording almost every day that he spent in the physical proximity of his Lord via his many personal diaries and photographs.

Blessed by Baba to join Radiosai Global Harmony, which has been singly responsible in spreading the message and life of Bhagawan to all parts of the globe, he currently does a host of activities there including the Thursday Live satsangs, producing documentaries on Swami and his message and, of course, writing articles.

He was Swami’s ‘official’ photographer for nearly 5 years and travelled along with Him during His trips to Hadshi, Mumbai, Delhi and Simla. Photography is not just his hobby - it’s his passion and he has worshipped Swami through it. After Bhagawan’s Mahasamadhi in April 2011, Aravind started to write blogs based on what he had recorded in his personal diaries and experiences of several students. The blogs hit a million views and, based on feedback from readers, he was inspired to contemplate a book.

More than all this Aravind has tremendous love for Swami, his biggest and greatest hero. That's what propels him to excel in any and all endeavours that he takes up - be it writing, speaking, photography or video editing.

About the Series: Sai Student Memoirs

The autobiography of Aravind Balasubramanya in a series of two books - Memoirs Of A Sai Student and Capturing Divinity.

This book is very spiritually uplifting. First when I saw the title I was not interested thinking what the contents will be. After 2 years listened to Author on Youtube on various programs and decided to buy the book. It is very interesting and energising book. I have completed reading Capturing Divinity and now on to his two other books. If you love Sri Sathya Sai Baba dont miss reading the books authored by Arvind Balasubramanya.

You have subscribed to alerts for Aravind Balasubramanya.

You have been added to Aravind Balasubramanya's favorite list.

You can also sign-up to receive email notifications whenever Aravind Balasubramanya releases a new book.