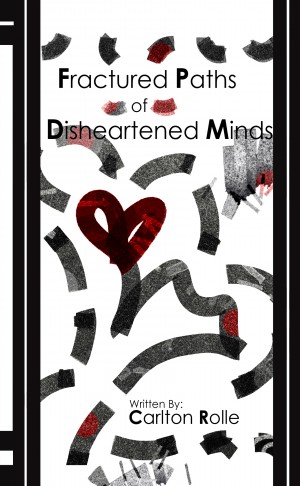 Eventually so much changes that the person behind the mirror is unrecognizable. Confronting issues of self-image and personal value are brought out. After a while, it implores questions such as: How far are you willing to go? How deep have you sunken? Is it worth it? Should you shun it or learn from the experience?

Treat the book as an instrument to learn from defeating notions of self. The illustrations presented are symbolic portrayals of the poems. Life isn’t always black or white. Most people travel through both colors mixing into shades of grey. To be blind is to see one side or another. To accept and grasp life there must balance. It is my intent to show a glimpse of paths that others have taken.
Available ebook formats: epub mobi pdf txt html
First 20% Sample: epub mobi (Kindle) Online Reader
Price: $2.99 USD
Buy Add to Library Give as a Gift
How gifting works
Create Widget
Tags: love discovery emotions survival
About Carlton Rolle

Carlton Rolle has had the opportunity to observe and live in various lifestyles. These places influenced the core of what made up his value system. Throughout all of the experiences, he began to understand that everyone has a story to tell regardless of their socio-economic, religious, racial, sexual, historically-based beliefs, etc.

Carlton graduated from Michigan State University with a Bachelor's degree in Liberal Arts. He then attained a Master's degree in Business Administration from University of Phoenix. With life experiences and knowledge from academia to support himself, Carlton began writing for several web-based magazines and blogs. During this time he began to explore writing from several genres. This paved the path towards writing books.

In Carlton's life, language and writing became another mode of expression. Writing sets the stage for thoughts and knowledge to be shared. He believes that people who connect with others have greater understanding of themselves. Carlton wants to enrich the world with artistic forms of expression from the mind, body, and soul of an experience.

You have subscribed to alerts for Carlton Rolle.

You have been added to Carlton Rolle's favorite list.

You can also sign-up to receive email notifications whenever Carlton Rolle releases a new book.