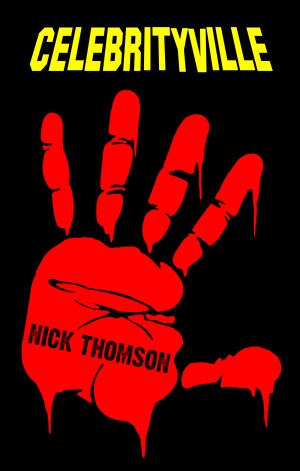 A transgressive crime thriller that takes a satirical bite into the warped world of celebrity by way of murder, mayhem, revenge, and a painfully public divorce. More
“Celebrityville” is a crime thriller with a satirical bite, detailing the warped breakdown of Jack Carter Christian – that actor in that film you think you saw once – now best known for his impending, and very public, divorce from the world-famous Sandi Valone Rockwood. Suffering from a film set head injury, and hounded by social media 'clicktivists' and hashtag protesters, Jack soon finds himself in deep trouble – as deep and dark as the cavernous pit in his stomach when he realises the horribly enticing truth about what he's capable of.

Notorious Stranger/Ridiculed Icon/Dominated Avenger – this is the first story in the “Celebrityville Series”.

Also includes the tie-in short story “The Great and The Good”, in which gossip from behind the velvet curtain, and the rehabilitating merits of altruism, clash with a hallucinatory public meltdown.

Nick Thomson is a writer and freelance filmmaker. He works mostly in documentaries and shorts, best known for the short film "For Want Of A Nail" (which was inspired by his own experiences with Obsessive Compulsive Disorder), as well as his work in educational films. His work has screened around the world at festivals and on television, gathering a host of nominations and wins.

Nick is also the author of the horror novella "Dug Deep", and the 'Celebrityville' series of books. Additionally, he is a staff writer for the indie zine Sleaze Fiend Magazine, and has maintained a blog - www.deadshed.com - since 2007, with new reviews of exploitation films every month. He is currently putting the finishing touches to his new novel "Murder at the Grindhouse", a coming-of-age murder mystery set during the last notorious years of New York City's 42nd Street.

About the Series: Celebrityville

Stand alone – but interconnected – tales of murder and mayhem, conspiracy and infamy, sex and drugs and kale smoothies, are what you'll find in the absurd world of the Celebrityville Series.

Populated by besieged movie stars, preyed-upon pop singers, bullying bloggers, perverted paparazzi, in this thrilling universe bit players in one story can become major characters in the next.

Taking a darkly comedic bite out of celebrity excess, the Celebrityville Series tells stories of revenge-driven accidental killers, out-of-control starlets, twisted scandal merchants, and more besides. Here you will slip behind the velvet curtain and tumble down the rabbit hole into the bizarre lives of stars like Jack Carter Christian, Roxie Black, Sandi Valone Rockwood, Kurt McKane, and Rebel Fetchko.

Blurring the lines between public life and private life, fanatical idolisation and vicious voyeurism, in the chaotic world of the Celebrityville Series the savage truth and the sordid fiction will collide in spectacular fashion.

You have subscribed to alerts for Nick Thomson.

You have been added to Nick Thomson's favorite list.

You can also sign-up to receive email notifications whenever Nick Thomson releases a new book.