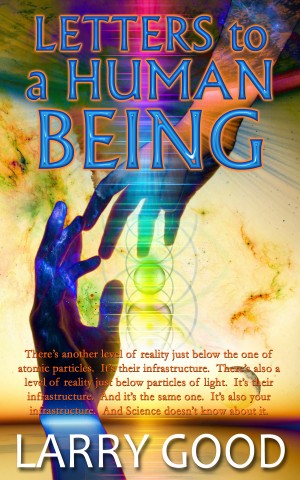 Letters to a Human Being

It's a totally NEW explanation. And it CAN be understood.

This is also a new and totally different explanation of stars and galaxies and planets and light and atoms and heat and everything else. But they had to come before you. This book is about the new discovery of a fundamental reality that explains the origin of People---and of the universe---for the first time.

You are made of particles. So is everything else. So there must be a particle formation process that forms or recombines the particles of our bodies and of all other atoms. There is. And Science doesn't yet know about it. It also recombines particles of light! Want to know how particles of light get their motion after being recombined? You can, and it's the most reasonable of explanations---it's the only one possible! How do you think YOU get YOUR motion? Again, there's only one way, and it's explained.

This is a book of Self and Discovery. These Letters introduce a Breakthrough in Understanding awaited for as long as People have sought to understand. Humanity will never be the same. It will be BETTER.
Download: epub
Price: Free! USD
Add to Library
Create Widget
Tags: life energy humanity stars heat light atoms electrons gravitation motion
About Larry Good

Larry Good grew up in Nottoway County, Virginia. Blackstone High School awarded him a diploma, the University of Virginia a B.A., and the College of William and Mary a master's degree in Education.
He played football in high achool, both offense and defense, as number 66. The team won a Regional title. He met the Tackling Dummy on the Practice Field of Blackstone High School.
The first thing after college, he became an English teacher, and before long he had spent most of his time in classrooms. When The Tree of Ticket Leaves takes Meri to The Lands, the first one after The Autumnforest is The Land of Upsidedown Learning. You learn through your feet. (Meri takes off her shoes and socks.) The one after that is The Land of Handwriting Speech. There's no sound when someone speaks, but you can read it. The air of this land is unforgettable.
For a while the author went to work for the C & P Telephone Company. The business office was a large room filled with service representatives at their desks talking to customers on telephones. When the man of the house called, the service representative wrote "mr cld" on her records. From these five letters came The Mistercald River which flows right through the middle of The Lands. You can see it from The Tree of Ticket Leaves, which is in The Land of Pink Windmills.

You have subscribed to alerts for Larry Good.

You have been added to Larry Good's favorite list.

You can also sign-up to receive email notifications whenever Larry Good releases a new book.