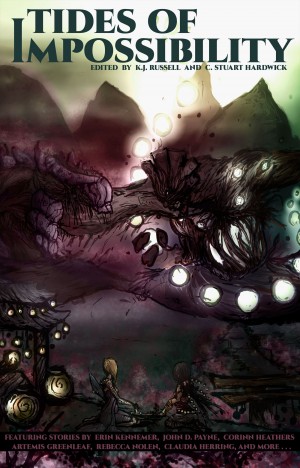 By Houston Writers Guild
A proudly independent fantasy anthology, the Houston Writers Guild presents sixteen short stories: fables, sword and sorcery, and urban fantasy. These bold visions of the impossible will take you to worlds both very distant and closer than you'll believe. The second in a series of anthologies from the Guild, it is being produced with funds faithfully pledged by local readers. More
A proudly independent fantasy anthology!

The Houston Writers Guild presents sixteen short stories: fables, sword and sorcery, and urban fantasy. These bold visions of the impossible will take you to worlds both very distant and closer than you'll believe.

Among these stories are...

Talisman by Patricia C. Hughes tells of a man following a supernatural calling to a small town near an ancient castle. There he confronts the dark history of the place, overcoming dangerous magic and a plot that's been in the works for hundreds of years.

The Bargain by Claudia Herring is about an Angel named Andras sent with a message for a devout yet unpleasant Marquis. But Andras is preparing himself to handle the mission's deeper and more disturbing implications that draw into question the holiness of everything involved.

The second in a series of anthologies from the Houston Writer's Guild. Tides of Impossibility is the fantasy companion of a science fiction anthology published last year, Tides of Possibility, both produced using funds faithfully pledged by local readers. This time, K.J. Russell has teamed up with "Writers of the Future" winner C. Stuart Hardwick to bring the best of Houston's visionary talent to you. Check out both anthologies and find out what kind of worlds the writers of Space City can imagine!
Available ebook formats: epub mobi pdf rtf lrf pdb txt html
First 20% Sample: epub mobi (Kindle) lrf more Online Reader
pdb
Price: $0.99 USD
Buy Add to Library Give as a Gift
How gifting works
Create Widget
Tags: urban fantasy sword and sorcery dark fantasy epic fantasy
About Houston Writers Guild

The Houston Writers Guild is a nonprofit organization and community of writers whose purpose is to support each other in the author’s craft and writing career through:
1. Engendering safe environments for writers of all skill levels
2. Reciprically sharing time, talent, and knowledge
3. Creating opportunities for the development of writing careers
4. Celebrating the success of each as a success of all
5. Providing a platform through which members forge life-long relationships in writing and publishing, and
6. Fostering a culture of continuous learning.

Check out the newest at www.houstonwritersguild.org

Reviews of Tides of Impossibility by Houston Writers Guild

You have subscribed to alerts for Houston Writers Guild.

You have been added to Houston Writers Guild's favorite list.

You can also sign-up to receive email notifications whenever Houston Writers Guild releases a new book.