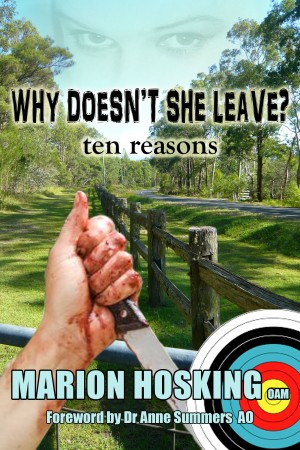 Why Doesn't She Leave?...Ten Reasons

Few can understand the dilemma of those trapped by love of a perpetrator and the proven 'slave mentality' brought about by the Stockholm Syndrome. The author's close contact with a women's refuge provides an insight into all of the reasons that keep women in unsafe domestic situations. In the first instance, women must be believed otherwise further batterings and murder will occur. More
Why Doesn't She Leave? is a question repeatedly asked of women suffering domestic violence. Although there are a myriad of reasons, the author offers ten. Among these are prominent cases of either murder, murder/suicide, immolation, rape and assault, all of which occurred in the Manning Valley of New South Wales, Australia. The names have been changed but the author retains the records. No one can possibly understand the dilemma of those trapped by love of the perpetrator, devotion to children and the the proven 'slave mentality' brought about by the Stockholm Syndrome. I, the author of this book, have been associated for thirty years with 'Lyns Place',Taree, New South Wales, Women's Refuge, I have witnessed the results of all of the above. Horrific is a word that springs to mind but there is no word that really describes the terror that these women endured.What began as an archival chore became a voice for all of the women for whom Lyn's Place was a refuge!
When I first wrote this book I believed change was on the horizon. Not so. The Bureau of Statistics NSW provides little hope; three women a fortnight murdered. What about the collateral damage? Motherless children, trauma of the worst kind, hate, fear, despair, future prospects? Only when male dominated, authoritarian law enforcement agencies and governments acknowledge the depth of this attack on our civil society will we see change!
Available ebook formats: epub mobi pdf rtf lrf pdb txt html
First 20% Sample: epub mobi (Kindle) lrf more Online Reader
pdb
Price: $2.99 USD
Buy Add to Library Give as a Gift
How gifting works
Create Widget
Tags: murder fear family violence domination slavery refuge childabuse murdersuicide stockholmsyndrome
About Marion Hosking

Marion Hosking OAM was born in Sydney Australia . She left school at thirteen. From that moment she worked and studied. She spent the Great Depression and war years cossetted and protected by a kind, loving father and funny, loving, intelligent mother. Her interest in the women's refuge movement stemmed from seeing the wife of a prominent boxer bruised and beaten while neighbours laughingly said, 'They're at it again'! There was no sympathy for the woman.
Interested in the women's movement, politics and the Humanist Society, she became concerned with the plight of women suffering domestic violence.
She attended New England, NSW University gaining a BA in 2001 at age 74. In the same year she was awarded the Centenary Medal, nominated for Premier's Award. In 2006 she was nominated for Australian of Year and in 2008 invested with the Order of Australia Medal(OAM).
Marion, married for 65 years, has three children and two grandchildren. She has been a business woman, organiser of seminars, secretary and now is an artist and writer. She is also 'scribe' for 'Socialist Women for Justice', a women's group concerned with social issues.

Reviews of Why Doesn't She Leave?...Ten Reasons by Marion Hosking

You have subscribed to Smashwords Alerts new release notifications for Marion Hosking.

You have been added to Marion Hosking's favorite list.

You can also sign-up to receive email notifications whenever Marion Hosking releases a new book.