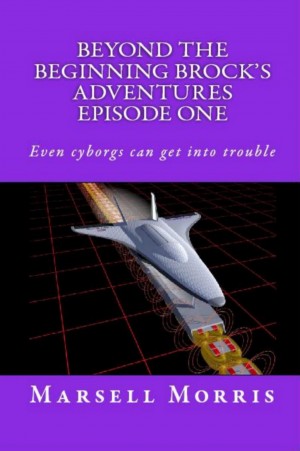 Beyond the Beginning Brock’s Adventures Episode One

By Marsell Morris
While knowing the Earth was doomed, scientist send a cyborg, Captain Brock, on a mission to save the human species. However, Brock’s sense of adventure constantly gets him into trouble, and while nearly loosing his life, he all but assures failure of the mission. Can the human species depend on Brock to do the right thing? More
Half-millennium earlier...

…A benevolent alien race looked down on mankind — studied him, and saw he’d ceased his murderous ways, and had learned to live in harmony with those of his kind. They watched as the humans began to master space travel and visit other planets. But, also, knew the human species was doomed because of a prematurely expanding Sun. At that critical juncture, the aliens decided to help.

The year, 2601 AD. The place, New Mexico, in what was once the United States of America, on a dying planet called Earth and one year before the launch of the humankind-saving Time Ship.

After building the Time Ship — using alien instructions found on Mars — The World Body Politic, send a disgruntled Captain Brock, part-human, part-cyborg with a genetically enhanced human brain, on a one-way mission to a distant Earth-like planet. Accompanied by a crew of 1,000 young and mischievous, breeding couples, Brock’s objective is the rebirth of human civilization.

Brock’s reckless compulsion to explore other planets leads him astray. He is nearly destroyed, but the Aliens intervene. Brock discovers they have plans to save the entire population of Earth. He, also, discovers the aliens are not entirely altruistic. They have self-serving intentions for the rescued masses, who soon begin misbehaving after their rescue.

Now realizing they made a mistake, the disapproving Aliens do not tolerate the human’s behavior, and employing a bizarre twist, do something about it.

“Beyond the Beginning” is an action-saturated, science fiction tale and an examination of human interaction and conflict — of despair, introspection, and eventual hope while contemplating how a future global society might respond to possible threats to their existence.

The unique plot and unconventional ending will appeal to discerning science fiction readers while generating anticipation for the completed sequel.

Marsell was born in Detroit Michigan in the year of… well, a good while ago. After graduating from Cass Technical High School, Marsell went to work for the Chrysler Corporation as a conveyor loader. Shortly after beginning his employment with Chrysler, he married, and fathered three children. Thirty-one years later, and after having gained the position of production supervisor, he retired at fifty.

After retiring, he began playing golf everyday and all day. Having lowered his handicap to near scratch, and winning a tournament at even par, and behind a debilitating injury, he was unable to continue playing. He had a lot of free time on his hands, whereupon, he took up writing as a hobby and time killer and discovered he had talent for spinning a yarn.

After pounding out eleven urban fictions, covering everything from drug use, prostitution, gang crime, murder, and romance/erotica, and having always been a science fiction fan from his teenage years, he thought he’d try his hand at writing a Sci-Fi tail, which culminated in his first work “Alien Plot - First Contact” now retitled "Alien Offensive - Nanobot Storm" and its four sequels, and which, at one time before he ran into problems with its publisher, was considered good fodder for production as a movie, not because he is such a great writer, but because of its unique, previously unexplored, plot.

He still lives in Detroit, and being a compulsive writer, he spends most of his time wearing out his fourth keyboard replacement, while pursuing what he loves doing — writing more tails with unique story lines.

About the Series: Beyond The Beginning - Brock’s Adventures

Book One describes how the human species, after destroying their planet, and after being forced to move underground, and with the aid of a highly intelligent, alien species, realizes hope for the continuation of the human race.

It introduces, Brock, a part human, part machine, cyborg, and his quirky personality. It also introduces the Time Ship, the vehicle Brock is designed to pilot. It also focuses on how Brock, with an overactive sense of adventure, constantly get himself in trouble.

Book Two begins after the human species is rescued and moved to a beautiful new world.

It details how the rescuing alien species are not content with human behavior, and attempt to modify human’s through genetic manipulation, which backfires while nearly causing the extinction of both humans and aliens. Brock is called upon to save both species and prevails.

It also details a nefarious alien plan that could result in a super human alien species with powers not predicted.

And of course, it details how Brock, again, exposes himself to life threatening danger, while accompanied by his traveling sidekick, Number One, a robotic, intelligent, android.

Also in Series: Beyond The Beginning - Brock’s Adventures

You have subscribed to alerts for Marsell Morris.

You have been added to Marsell Morris's favorite list.

You can also sign-up to receive email notifications whenever Marsell Morris releases a new book.