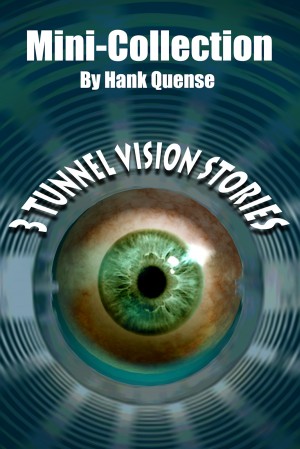 By Hank Quense
Rated 4.00/5 based on 6 reviews
Download an hour of solid entertainment!
Three of my best short stories available now in one download. The previously published stories include: Saving the Shore, Lucy in Love and Sponsored By ...
Enjoy some laughs with two humorous fantasy story and one satiric Scifi story. More
Saving the Shore: have you ever wondered what happened to the Ring-bearer's descendants? This story will fill in some of the blanks

Lucy in Love: Lucretia Borgia and her dad, Pope Alexander VI are back on earth. In Manhattan! Sent by Satan, their mission is to increase Hell's market share of souls.

Early in his writing career, he was strongly influenced by two authors: Douglas Adams and his Hitchhikers Guide to the Galaxy and Joseph Heller’s Catch-22. Happily, Hank has never quite recovered from those experiences.

He lives with his wife in northern New Jersey, a mere 20 miles from Manhattan, thecenter of the galaxy (according to those who live in Manhattan). They have two daughters and five grandchildren all of whom live close by.

For vacations, Hank and Pat usually visit distant parts of the galaxy. Occasionally, they also time-travel.

Besides writing novels, Hank lectures on fiction writing, publishing and book marketing. He is most proud of his talk showing grammar school kids how to create a short story. He used these lectures to create an advanced ebook with embedded videos to coach the students on how to create characters, plots and setting. The target audience is 4th to 7th graders. The book’s title is Fiction Writing Workshop for Kids.

I received this e-book as a complimentary copy from the author. It is a sample of more to come. IF you like the Hobbit and Lord of the Rings fantasies you'll like this. Much shorter, lighter and good fun. It's quirky but light enough to read in one fell swoop. Full of Hank Quenses' humour, if you read Tales From Gundarland you'll recognise the style. A tale of greed, you've got to love Loki's stupidity. Wotan is not happy!

An entertaining mix of three stories that takes real life traits and exagerates them into humourous yet darkly sinister stories that indirectly question real decisions and morals. My favourite was definitely Sponsored By... especially given recent debates about allowing brands into schools. This story follows an army maneuvre that is not quite what it seems with heavy and obvious sponsorship and an enemy that are fighting to keep themselves out of prison. Highly amusing and entertaining, a thoroughly tongue in cheek read.

This is a collection of three short stories. The first is a Hobbit parody which is quite amusing. I believe it is part of an ongoing set of stories set in Gunderland. The second story involves Lucrecia and Alexander Borgia who have come back to Earth from Hell to set up a loan business with the aim of trapping souls for Satan. The third story involves a military manoeuvres in which the Army uses sponsorship to pay for its costs. There are tanks with McDonalds logos and bayonets with condom company logos. The enemy takes the form of two types - illegal immigrants and bankrupt individuals. The illegal immigrants are herded into 'towns' which are the initial object and are shelled. Those who survive are deported. the aim is to reduce the cost of deporting them. A counter attack then takes place against the military from the armed bankrupts. The aim here is to reduce prison over-crowding. As you may tell I found the third story to be the best and the one which struck a chord. The author is obviously playing on current themes in his homeland to full advantage. Humour is the best way of making a point and he does this very well. This small collection is well worth the tiny price of the eBook just to read this story alone. Go buy it and see for yourself.

Hank Quense’s Mini Collection contains three short stories. Saving the Shore is about a mayor who contacts an old wizard, a dwarf, and an elf for help when the yuks threaten to change his beloved town, in Lord of the Rings fashion. Lucy in Love is about Lucretia Borgia and her father, Pope Alexander VI, whom hell sends back to earth to run a loan office where late payments result in loss of eternal soul. Sponsored by... is about Captain Dave Stiller and how he attempts to survive in a world where advertising and marketing have been merged with military.

I really enjoyed Mini Collection. Saving the Shore was a funny version of Lord of the Rings with strange, but interesting, characters, and creative magic. I liked the Shore’s comparison to a shrub, and the ending wasn’t what I had been expecting. Lucy in Love was pretty good, and even though I didn’t enjoy the depiction of Heaven and Hell I was able to enjoy Lucy’s struggle to overcome her sexist father to head the loan business and earn more time on Earth with her new love interest. Sponsored By... was my favorite story of the three. It’s an excellent story. The future world in this story was very creative. I laughed at descriptions of Budweiser logos on army tanks, commercials on their radios, and and boysenberry and coconut-kumquat flavored sports drinks provided in their canteens. Although I was fully entertained by this story, I was a little uneasy because of how easily some of these events, bombing illegals, considering debt a crime, could happen. Perhaps I’m just paranoid. Overall, Mini Collection was a great read.

its 3 short stories. the first one Is a mayor of shores wants to stop these builders from ruining his town. He okay with him wanting to build roads and casino but not a bunch of houses. they are big brutes and he is short. He gets a old wizard to try and help him. the wizard gets a drawf, song bard to record actions. he plans a quest to get 5 magical rings so they can stop the builders taking over. So they plan to steal the 4 rings from a dragon. but than he doesnt know how to use them. its silly quick read it kept my attention.
the second is about Lucy Borgia and her father alex pope are back in New York running a loan office for satan and if people miss loan payment he gets thier soul. Heaven Micheal is hiring thugs,calling cops and building inspecters trying to harrass alex because of the deciet he used as a pope hundred of years ago. Lucy want to run loan office and have a kid. short.
Not bad stories. they are well written and short I would read another book of his.

(reviewed 5 days after purchase)
Mark Henderson reviewed on May 16, 2011

Hank Quesne is equally accomplished, and equally amusing, in the short story format as in his novels. "Saving the Shore" is just plain good fun, with affectionate smiles at the expense of another literary classic. The other two stories in this collection are social satires that relate to the modern world. The satire has a sharp edge, but Quesne is the sort of author who tickles rather than cuts you with the literary scalpel.

Who else would have cast Lucretia Borgia as an office secretary in one of the world's financial hubs? It isn't her choice, of course (she's capable of far more demanding roles and in any case she wants to find love), but neither her father, Pope Alexander VI, nor their real employer, Satan, believes that a woman can rise above the level of secretary. Unfortunately for their schemes, Heaven is playing dirty tricks. The denouement is highly satisfying.

If "Sponsored By..." wasn't so downright funny, the feeling it would convey would be anger - at militarism, at commercialism and at the treatment of offenders. Quesne makes his point forcefully, but he makes us laugh while he's doing it. This is an excellent piece of writing. I don't know any other author (except Terry Pratchett, perhaps) who can make incisive social comments in a genuinely entertaining way.

You have subscribed to alerts for Hank Quense.

You have been added to Hank Quense's favorite list.

You can also sign-up to receive email notifications whenever Hank Quense releases a new book.