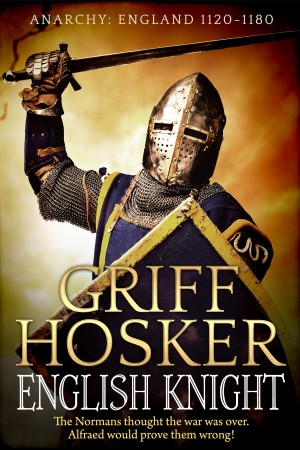 Anarchy is a fast moving series set in that most turbulent of times, The Anarchy. Filled with action and battles, this series chronicles a bloody time in English history when the only people you could rely on were your household warriors and you slept with a dagger beneath your bed.

This story opened up with some promise but I was soon puzzled by the authors reason for demeaning his key character. Alfraed is a young man who was raised in Costantinople. He is aboard a ship heading back to England where his father wishes to spend his declining years. While on the ship, Alfraed goes on drinking binge, which created some confusion for me about how the author wanted to present his character. This section has no impact on the story what so ever.
Further on in the book the author does the same thing when Alfraed has a ridiculous argument with a blacksmith, which didn’t fit the character he was trying to portray. Also. Other characters in the book were singing their master’s praises (Alfraed) to all and sundry. It isn’t needed and weakens the key character.
However, the plot is feasible and keeps you reading and the story and writing improved as I read on. If you compare this book with one of Bernard Cornwell’s Viking series you will understand what I have said here. Receiving criticism is a vital component of being a writer, for with out you cannot improve.

You have subscribed to Smashwords Alerts new release notifications for Griff Hosker.

You have been added to Griff Hosker's favorite list.

You can also sign-up to receive email notifications whenever Griff Hosker releases a new book.