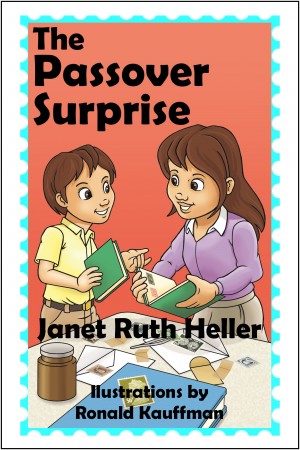 This chapter book for ages 8 to 12 (grades 3 to 6) takes place around 1960 and portrays a Jewish family celebrating Sabbath and Passover. It also includes details about the experiences of American soldiers during World War II and the early days of the Civil Rights Movement. The book contains a handy Glossary of the Hebrew words and difficult terms used in the text, as well as a Discussion Guide to inspire readers to explore the issues raised by this book.

Janet Ruth Heller is the president of the Michigan College English Association. She has a Ph.D. in English from the University of Chicago and has taught literature, creative writing, linguistics, and women’s studies courses.

Janet’s fiction picture book about bullying, How the Moon Regained Her Shape, (Arbordale, 2006), has received many awards, including a Book Sense Pick (2006), a Children’s Choices selection (2007), a Benjamin Franklin Award (2007), and a Gold Medal in the Moonbeam Children’s Book Awards (2007).

You have subscribed to alerts for Janet Ruth Heller.

You have been added to Janet Ruth Heller's favorite list.

You can also sign-up to receive email notifications whenever Janet Ruth Heller releases a new book.