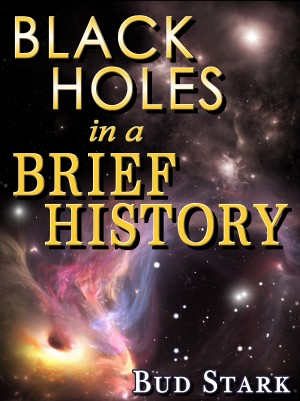 Black Holes In A Brief History

By Bud Stark
Stephen Hawking, in A Brief History of Time, asks how and why the the universe began and if and how it will end, and gives the various theories that deal with these questions, including his own. But most cosmologists do not agree with Hawking’s theory nor with each other’s. But most do agree that design is not an answer. Black Holes In A Brief History asks why. More
I and millions of readers without a scientific education were delighted when Stephen Hawking published A Brief History of Time. Its purpose was to give us an insight into how science, cosmologist especially, tackle the “questions that are of interest to us all,”where did the universe come from? How and why did it begin? Will it come to an end, and if so, how? The insight he imparted opened questions about Hawking’s own methods and conclusions: were they shared by most cosmologists? Did they adequately answer the questions the book was written to address? In both cases, no. In A Brief History, Hawking presents to the general public his own no boundary theory which most cosmologist do not espouse. And of the things which Hawking does share with other cosmologist, neither he nor they can answer the questions he poses. Black Holes in A Brief History demonstrates that in fact his no boundary theory is but another failed attempt to do so. In this case sciences failure rings a note of hope rather than of dispair. The most prominant cosmologists see the universe as pointless and we, as Hawking maintains, as insignificant creatures who accidentally inhabit it. On the brighter side, sciences successes in medicine, energy, comunication, biology, water purification, transportation and on and on sound a peal of hope that makes of current cosmology little more than entertainment. Long before formal science existed, religions struggled with the same questions of where the universe came from and how and why, and if it will end and, if so, how, and shared with science the same failure rate. In addition, religion was dogged by another, more important question: can a good, all powerful god design an evil world? These are the questions Black Holes in A Brief History deals with, also dogged by another: Is there any hope to be found in such a morass of failure
Download: epub mobi (Kindle) pdf more Online Reader
rtf lrf pdb txt
Price: Free! USD
Add to Library
Create Widget
Tags: despair and hope universe interactions philosophy science evolution hawkingno boundary conditions intelligent designaccidental universe random universe big bang cosmology
About Bud Stark

I was born in Holliday, Texas in 1938, the second youngest of eight children. We lived in Texas about a month then moved to Oklahoma. We were an itinerant oilfield family. In 1941 we moved to California, my home ever since. I took up my father's occupation for most of my working life. My wife, Reta, and I were married in 1968. We have two daughters, one son and five grandchildren. I retired in 1995 and began research and writing on cosmology and evolution as they apply to the debate about an intelligently designed universe and one of random chance. I suffered a few rejections for work I had submitted for paper publication and decided not to suffer more, even though I was convinced that my input on those subjects was noteworthy. That is where things were left until I discovered eBook publishing. Smashwords has provided a way for me to get the word out to the untrained in science that they are not helpless before what seems at times to be an onslaught of science against the reasoned faith that whatever life is and whatever its purpose, it, like the universe, did not come from nothing.

You have subscribed to alerts for Bud Stark.

You have been added to Bud Stark's favorite list.

You can also sign-up to receive email notifications whenever Bud Stark releases a new book.