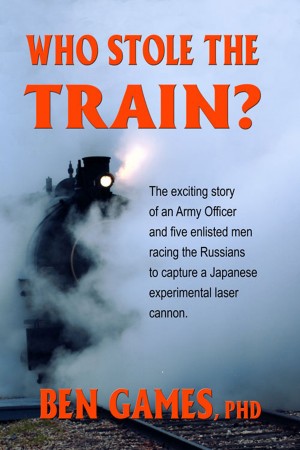 Who Stole the Train?

By Ben Games
This short, nonfiction semi-biographical story from WWII tells of an Army Officer and five enlisted men racing the Russians to capture a Japanese experimental laser cannon. The weapon is located on a cliff overlooking the Sea of Japan. Read this entertaining account to find out who ultimately won the race and the extremes they went to in order to complete their mission!

Ben R. Games, PhD, Major, CW-4, TCNA-6, flew bombers and night fighters during WWII, then Jet Fighters for the USAF during the Korean War, and Chinook helicopters in Vietnam for the 1st Cavalry Division. He is a member of the North American Mach Busters Club and of the Distinguished Flying Cross Society with 737 recorded combat hours. After 35 years he retired from military flying in 1978 and later became the manager of the Turks & Caicos National Airline.

During the past fifty years, stories of his flying adventures have been read by people around the world. They range from a child’s Christmas story, biographical adventures, to science fiction.

You have subscribed to alerts for Ben Games.

You have been added to Ben Games's favorite list.

You can also sign-up to receive email notifications whenever Ben Games releases a new book.