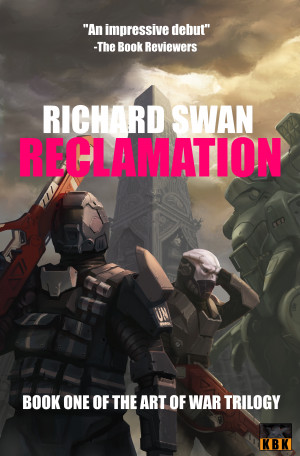 Reclamation (Book One of the Art of War Trilogy)

By Richard Swan
Rated 3.60/5 based on 5 reviews
Espionage, intelligence, warfare, politics, religion, diplomacy, genocide... the Reclamation has begun. More
Tier Three: a compact of six vast interstellar empires, intricately bound by political, diplomatic and trade accords. Together, after centuries of massacres, brushfire wars, trade embargoes and political assassinations, they have finally brought a modicum of peace to a turbulent galaxy.

But all of it is about to unravel.

In deep space, the kaygryn inexplicably launch a suicidal attack on an Ascendancy crusade fleet; on the shared world of Uvolon, the Ascendancy shoots down a kaygryn corvette over the human city of Anternis.

Zavian Yano, a member of the United Nations’ élite Xeno Division diplomatic corps, has one job: to stop the provar and the kaygryn from going to war.

Strike Commander John Garrick, one of Solar Operations Command’s most senior generals, also has one job; but he has been side-lined by the President at the height of tensions.

On a rainy Uvolonese mountainside, Special Agent Lyra Staerck is killed by a kinetic railstrike, and must find out why.

And Captain Ben Vondur, a pilot in UNAF's 6th Goliath Squadron, has orders that seem designed only to inflame the situation.

Four people, separated by thousands of lightyears, are bound by fate.

And all the while the galaxy hurtles towards war…

Richard is a commercial litigator by trade, and lives and works in London.

About the Series: The Art of War Trilogy

Reclamation, The Ascendancy War, Empire of the Fallen

Also in Series: The Art of War Trilogy

Difficult to understand at first - the author plunges you into the plot without explaining who the characters are, what the setting is, or even what acronyms mean until later. Oddly, this made it more enjoyable to read, as it felt like little prizes as things became clearer.

(review of free book)
Zane Bradshaw reviewed on Oct. 23, 2016
(no rating)
The tale was good. the writing was above average, for somebody still gaining experience.
I found no problems with the wording.
Was most satisfied till the end.

The biggest disappointment was the glaring impossibility of a villain smuggling in assassination gear in the last part of the book. As if government security wouldn't be executing random sweeps and molecular level searches for anybody in close proximity to an interstellar president... Jeez. And as if anybody wouldn't be seeking to pull down/compete/blab/dob in the same villain for not performing well in her earlier career as some form of subversion. And how implanted tech is circumnavigated in the murder. Like the victim has time to verbally react but computers operating at picosecond levels can't.... And implanted communication tech still has to explain how radiation doen't affect the host. And if its some form of quantam/FTL comms, then jamming it also is a big ask.

Sorry but this is just plain bad. I made it to 15 per cent and that was three times more than I should have read.

One of the pitfalls amateur writers get into is getting far too complex and using words that are impossible to understand. This book was impossible to read. The plot jumps around with no common theme and with wreck less abandon. I am an It specialist with an advanced degree and found myself having to stop and look up the meaning of words, in which it turned out the context of the use of these words was extremely suspect.

Interesting read. Lots to keep up with given the difficult names. Enjoyed it immensly. Can't wait for book 2 and 3 . Aaron S.

This was one of the best books that I have had the pleasure to read. Mr Swan this is up there with the some of the greatest sci fi writers ever. Keep up the awesome work. I can't wait for your next project.I couldn't put it down. Eric M

You have subscribed to alerts for Richard Swan.

You have been added to Richard Swan's favorite list.

You can also sign-up to receive email notifications whenever Richard Swan releases a new book.