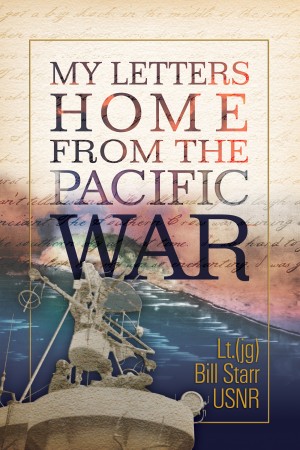 My Letters Home from the Pacific War

By Lt.(jg) Bill Starr USNR
These letters cover a great variety of war-time experiences, from terrifying near-death experiences on the beaches of Iwo Jima, and a kamikaze crash into the ship, to accounts of incredible adventures at Ie Shima, Osaka, Wakayama, Formosa and Shanghai. More
These letters cover an unbelievable variety of war-time experiences, not shared by many servicemen, from terrifying near-death experiences on the beaches at Iwo Jima where 6000 casualties occurred on the first day, and where a kamikaze pilot’s last-second inexplicable course-change caused his plane to crash harmlessly into the ship, (see front cover) to light-hearted accounts of tricky deals getting supplies. Also, in the move to Japan, the remarkable coincidental meeting, in a pearl shop in Osaka, of two former residents of New York, one American and one Japanese, and the unforgettable encounter with a Japanese Good Samaritan train-station agent.
The ship moves to Shanghai where it is to deliver pure water to the ships docked in the Whangpoo River. The Shanghai stories include the author’s near-miss of the Admiral’s ship and the unforseen reputation from that near-miss, the crew’s magical response to a priest’s request for aid to his famished orphans, the beautiful unapproachable Iranian page in the British production of Richard II, the hordes of international shoppers and the $63,000 suitcase, and widespread dysentery from ‘C’ rated restaurants. The next few months are spent on a frightening assignment as a ‘detonator’ ship, working with minesweepers off the coast of Formosa , clearing the area of mines.
The letters then move to Pearl Harbor where the author, now captain of the ship, through forgivable trickery, saves members of his crew from being transferred to ships going to the Bikini Atom Bomb test. On the last leg of the 8,000-mile return from Shanghai to the States, the ship runs into a massive storm off California, where it comes within 2 degrees of capsizing under mountainous waves.
A truly remarkable odyssey!
Available ebook formats: epub mobi pdf rtf lrf pdb txt html
First 20% Sample: epub mobi (Kindle) lrf more Online Reader
pdb
Price: $4.99 USD
Buy Add to Library Give as a Gift
How gifting works
Create Widget
Tags: memoir okinawa ww ii iwo jima kamikaze memoir naval memoir military
About Lt.(jg) Bill Starr USNR

A violin student at the Eastman School of Music when the Japanese attacked Pearl Harbor, Starr joined the US Naval Reserve Officer training program, and served on the LCS 36 in the battles of Iwo Jima and Okinawa, where his ship was struck by a kamikaze. At the end of the war, the ship served as a pure-water delivery ship at Shanghai, and as a ‘detonator’ ship in a mine-sweeping operation off Formosa. He was captain of the LCS 36 for eight months, and captain of the LCI 192 for its decommissioning. After discharge, he returned to Eastman for graduate study in music, and taught at the U. of Tennessee for thirty years, and the U. of Colorado for twenty. A prolific writer of college texts, he became fascinated by the Suzuki Method of teaching violin to small children. He went with his wife Constance, a pianist, and eight children to Japan for a year to observe Suzuki. They returned to become world leaders in the Suzuki Movement, teaching children and teachers throughout the U.S. and in Europe, Australia, South America, and Asia. Suzuki appointed Starr the first chairman of the board of the International Suzuki Association.

Reviews of My Letters Home from the Pacific War by Lt.(jg) Bill Starr USNR

You have subscribed to alerts for Lt.(jg) Bill Starr USNR.

Would you like to favorite Lt.(jg) Bill Starr USNR?

You have been added to Lt.(jg) Bill Starr USNR's favorite list.