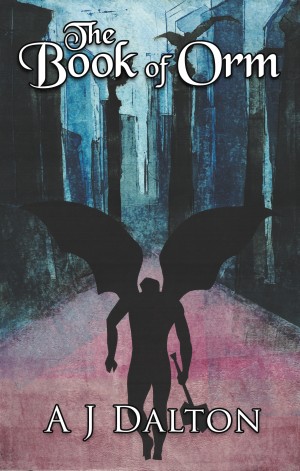 The Book of Orm

Excerpt:
Raggar refused to tire or submit. With savage energy he sought to lay ahold of the god and strangle him. For the briefest of moments it seemed he would find a grip or sink his bared teeth into the deity’s throat. His strength was prodigious. Yet it was in that fatal moment that the god slipped him and threw him down. [italicised section]

"Truly fantasy as it should be told! A high tempo plot, mystery and genuine intelligence' - Carl Rheinbeck

A J Dalton is one of the UK's leading authors of gothic fantasy. He is the author of the best-selling Flesh & Bone Trilogy (Necromancer's Gambit, Necromancer's Betrayal, and Necromancer's Fall). He is now working on his new series, Chronicles of a Cosmic Warlord.

Learn more about A J Dalton

AJ Dalton's first collection of short stories features a line-up of epic, imperfect yet steadfast heroes - yes, even the troll Orm of the title counts as a proper hero, since he has a quest of his own to endure. Orm and his fellow inhuman, the (reluctant) dragon, are written in lighter tones and have a lighter touch in general when compared to the weightier quests of the very Gemmellesque heroes of the two tales that are the backbone of this collection. And "Gemmellesque" is no disservice either - Warrior of Ages is a thunderous romp against the minions of a manipulative god, pitting faith and self against "progress", while Knight of Ages draws deep into realms of legend and fable to achieve the same effect. The fact that these two stories share several themes and tropes (for example the gathering of a band of heroes to save the day) is really the only thing I can find to count against them, as otherwise Dalton's prose powers the reader through both stories like Dros Delnoch never fell.

Oddly for a single-author collection, this isn't a single-author collection. Two other stories - Rusalka, by Nadine West, and The Nine Rules of the Nisse, by Matthew White, are included too, and though each is markedly different they do fit in with the North-European tone of Dalton's stories. Matthew White evokes Scandinavian childrens' stories of my childhood with his chapter headings, as his heroine does battle with a house-invading, rule-spouting imp. Nadine West goes into deeper waters with a tale of love and loss that also manages to make clear just how little human life means to the water spirits. Neither story is here just to make up the numbers, and I recommend reading through to the end.

Excellent fun for any fan of straight-out heroic fantasy, but also for anyone who wants some fresh talent in the mix too.

You have subscribed to alerts for A J Dalton.

You have been added to A J Dalton's favorite list.

You can also sign-up to receive email notifications whenever A J Dalton releases a new book.