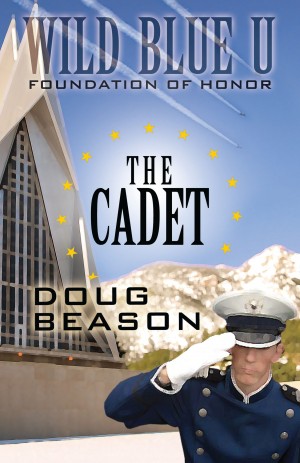 By Doug Beason
Wild Blue U: Book 1 - The Cadet is an historical saga chronicling the founding years of the United States Air Force Academy. It unveils the arduous training of America’s future leaders, showcasing empathetic, larger-than-life characters set against a fascinating tapestry of historical fact — and places them in vivid, history-changing events that affect the course of the nation. More
The Cadet, Book 1 of the Wild Blue U saga, chronicles the founding years of arduous training of America’s future leaders as they prepare to serve in such places from the jungles of Vietnam to the deserts of the Middle East. The Cadet is an accurate, historical saga of the Academy based on factual events – but populated with empathetic, larger-than-life characters that will appeal to prospective candidates, military members, and the reading public alike.

A Nebula Award finalist, Doug's short fiction has appeared in numerous magazines and anthologies, and he has written for publications as diverse as Analog, Amazing Stories, Physical Review Letters and Physics of Fluids to Clashing Views on Controversial Issues in Science, Technology and Society. Doug and Kevin's novel The Trinity Paradox holds the distinction of being the first work of fiction ever nominated for the American Physical Society's Forum award for promoting the understanding of physics in society, and was the first novel ever reviewed in Physics Today.


A Fellow of the American Physical Society and Ph.D. physicist, Doug has over 30 years of R&D experience that spans conducting basic research to directing applied-science programs and formulating national policy. In 2008, he retired as the Associate Laboratory Director for Threat Reduction at the Los Alamos National Laboratory, where he was responsible for programs that reduced the global threat of weapons of mass destruction. Before moving to Los Alamos, Doug completed a 24 year career as a US Air Force officer, retiring as a Colonel. His last active duty assignment was as the Commander of the Phillips Research Site (Kirtland AFB) and Deputy Director for Directed Energy at the Air Force Research Laboratory. He has worked on the White House staff for the President's Science Advisor under both the Clinton and Bush Administrations, as the key White House staffer for space science and technology. He has also served on a Vice Presidential committee headed by astronaut Tom Stafford (commander of Apollo-Soyuz and Apollo 10) to generate plans for the nation to return to the Moon and go on to Mars; directed an Air Force plasma physics research group; served in a dual appointment as an Associate Professor of Physics and Director of Faculty Research at the U.S. Air Force Academy; performed research at the Lawrence Livermore National Laboratory; and was a special advisor to Auburn University. He recently served on the USAF Science Advisory Board, is on the Air and Space Power Journal Editorial Board and was previously Vice President of the Directed Energy Professional Society.

Doug is a 1977 graduate of the United States Air Force Academy (dual B.S. in Physics and Mathematics), and holds an M.S. in Physics (University of New Mexico), an M.S. in National Resource Strategy (National Defense University), a Ph.D. in Physics (University of New Mexico), and was a military senior service school Distinguished Graduate from the Industrial College of the Armed Forces. The author of over 50 scholarly papers, his book Science and Technology Policy for the post-Cold War: A Case for Long-Term Research, was awarded the National Defense University President's "Strategic Vision" award and was used as a textbook . He is a Fellow of the American Physical Society, and Life Member of both the US Air Force Academy Association of Graduates and the Science Fiction Writers of America. An Eagle Scout, he has lived in Canada, the Philippine Islands, and Okinawa. He graduated from Kecoughtan High School in Hampton, VA, has been married 31 years, and is the proud father of two daughters.

He currently lives in Colorado and serves as Chief Scientist for the USAF Space Command.

You have subscribed to alerts for Doug Beason.

You have been added to Doug Beason's favorite list.

You can also sign-up to receive email notifications whenever Doug Beason releases a new book.