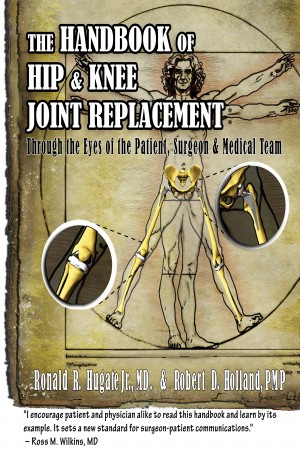 Handbook of Hip & Knee Joint Replacement: Through the Eyes of the Patient, Surgeon & Medical Team

By Robert Holland
This unique and excellent 5-Star handbook is for anyone considering Hip Joint Replacement or Knee Joint Replacement. It was written from the the perspectives of: the Surgeon, a Knee Patient, a Hip Patient, the Anesthesiologist, and the Physical Therapist! As such, it covers the entire spectrum of people involved. If you're considering this life changing journey -- this handbook is a must for you. More
Written in simple, non-jargon language with over 1,200 copies sold world wide, this highly praised, unbiased resource is for anybody thinking about total joint replacement (hip or knee). For the everyday person, it creates a decision making framework to guide you through the entire journey by using a proactive approach and empowering you to a successful outcome:

~ Dr. Hugate guides through the Orthopaedic Surgeon's point-of-view from every aspect including basis anatomy of the leg.
~ Robert Holland guides you through the Total Knee Joint Replacement, the Hospital Visit, and How to Prepare Your Home, as well as adding his comments throughout the handbook.
~ Francine Campone guides you through her journey with Total Hip Joint Replacement, as well as adding her comments throughout the handbook.
~ Inger Brueckner explains the Physical Therapy (PT) for b oth hip and knee replacement and why PT is an absolute must!
~ Dr. Checa explains your options in anesthesia. Did you know you have options?

So, what's in this handbook for you?

Empowerment - through knowledge and understanding!
Insight - into the minds of the surgeon, anesthesiologist and physical therapist!
Wisdom - from the patients and medical providers in their own words!
Learn - that joint replacement is not the only choice, and so much more!
Laugh - as our illustrator adds his own wry sense of humor in the form of cartoons!
Understand - the roles of the various in-hospital medical professionals!
Know - the risks involved with joint replacement and how to tell when things aren't going right!
Plan - how to prepare your home for afterwards and what you can do to strengthen yourself before you go!
See - the processes of arthritis and joint wear!
Prepare - for physical therapy and why its so critically important!
Realize - how your own human-factors act as a decision making matrix
Create Success - by including your family and teaching them how they can help!

~ Orthopedic Surgeon: Dr. Ronald R. Hugate Jr., MD, FAAOS - a renowned surgeon who also specializes in bone oncology and limb preservation, is a veteran combat-surgeon in the U.S. Army Reserves and has taken care of our troops in both Afghanistan and Iraq.
~ Anesthesiologist: Dr. Gianni Checa MD - a renowned anesthesiologist and pain management specialist in Denver Colorado.
~ Physical therapist: Inger Brueckner, MSPT - works with Dr. Hugate and is an excellent, senior physical therapist (and teaches and lectures on PT).

As far as the various methodologies explained in the handbook go, every joint implant manufacturer has their own, proprietary path. We didn't list these on purpose, as they are a biasing factor having much to do with commercial competition and corporate marketing. The basic principles of replacing a person's hip or knee joint will remain the same into the foreseeable future, the implant must be placed correctly and it is imperative that it be a good fit. While trends, materials, and methods concerning total joint replacement continually change and evolve, the decision making processes, the cautions and limitations, and the reasons for considering such a life changing operation all remain the same. Moreover, while each person's stay in the hospital will be somewhat different than described in the passages about the actual hospital stay (written by Mr. Holland based on his own experiences), many people have never been through such a profound operation as total joint replacement. The description of how it feels to go through this experience has been lauded by medical professionals and patients alike as being extremely helpful.

The--Handbook of Hip & Knee Joint Replacement: Through the Eyes of the Patient, Surgeon & Medical Team--took Dr. Hugate and myself about 16 months to complete. I donated 1,000s of volunteer-hours to the project in an effort with one simple goal: help anyone who wants help in getting through this extremely challenging life-journey to do so syccessfully.

My coauthor was a preeminent orthopedic surgeon. Dr. Ronald R. Hugate Jr., here in Denver Colorado, and also the guy who performed my second total-knee-joint-replacement.

I wrote everything non-medical in the handbook from the point-of-view of a person who has been through total-knee-replacement. I also edited the handbook (with some help from CreateSpace and Dr. Hugate, my coauthor). I designed, managed, and published it as well. It is available in eBook, Kindle, and Amazon paperback.

As of December, 2016, over 3,000 copies have been sold and it regularly garners 5-Star Reviews. We are very proud of it.

Next, and most important, I met and married my wife, Vicki, in the mid-70s. We have been sweethearts ever since! She is my greatest fan, harshest critic and forever-patron of the arts. Her hard work, sacrifice, and great long-term planning have enabled me to escape the work-a-day life and concentrate on the craft of writing since 2008. As such, my bio would be incomplete without mention of her. She is my greatest love!

In my youth up until 1988, I was in the Building and Construction Industry in anumber of different cratfs and trades, but mostly as a Master Electrician - Inside Wireman. During those years I worked on all four of the Jim Bridger, 500 megawatt, coal-fired powerhouses near Rock Springs, Wyoming; as well as the Fast-Flux Nuclear Breeders at Hanford, Washington; and lastly, on the helium-cooled, Thorium Reactor Prototype at Fort St. Vrain, Colorado. It was during those long and cold Denver winters as an unemployed construction-man that I started writing. In addition, throughout my life I have always been a musician, sometimes professional, sometimes amateur, and sometimes just a hobby. The last few years of my professional career were spent supporting victims of violent crimes as Director of Information Services for the State of Colorado Sheriffs Association where I supported and managed a statewide victim-advocate system.

Nowadays, I am a true fan of: Bill Gibson, the Wachowskis, Joss Whedon, J.J. Adams and Lawrence Kasdan—again to name but a few.

These are the masters I try to emulate. I write what I would want to read. I have great respect for my reader's time. This is the best any technical writer or fiction author can do. As to success, that is up to you, the readers. It had been great so far!

After graduation, I eventually became an Oracle Master Datababse Administrator (DBA) and ran my own consulting business for years. During the last phase of my professional career, I obtained my PMI/PMP (Project Management Insitute, Project Management Professional Certification) just in time for the Great Recession of 2008. Needless to say, that was the end of my career.

My life has taken some quantum leaps and wholly unexpected turns; however, throughout all of my various crafts and professions, my love of music and writing has been a constant -- especially writing.

I started writing full-time in 2008 and from then till now -- as long as I can get words into print -- I will be writing. Please take it from me, never let anybody tell you to let go of your dreams or your dream is too big. If you want it bad enough, you can do it. Stay positive, stay focused, stay tough, and keep your eyes on the prize!

Lastly, a word about the future—not mine—but the future of mankind itself. If we—the human race—can ever stop destroying ourselves (and our planet) with brushfire-wars, religious strife, exploitation of the people, and global pollution, long enough to reallocate our planet's resources—I believe the next heavy-industrial boom will be off-planet. We will eventually colonize and mine the Moon. The next step will be to do the same for Mars. Going outwards from the Sun we will mine and industrialize the Asteroid Belt, and finally colonize and exploit the moons of Saturn and Jupiter. That's a lot to write speculative science-fiction and fantasy about.

So, when I was asked by Smashwords to write my bio, the questions of: Where do I start (?), and: What do I say (?), are much harder to answer than you might imagine. The real answer lies not in this blog, but in my stories and non-fiction.

Thanks for your time and I wish you well.

You have subscribed to alerts for Robert Holland.

You have been added to Robert Holland's favorite list.

You can also sign-up to receive email notifications whenever Robert Holland releases a new book.