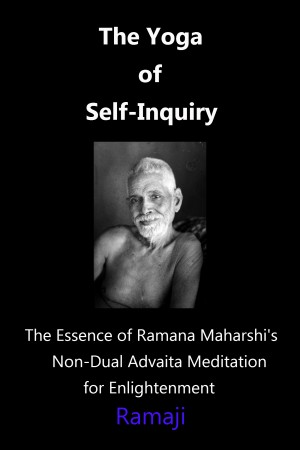 The Yoga of Self-Inquiry: the Essence of Ramana Maharshi's Non-Dual Advaita Meditation for Enlightenment

This one of a kind guide to meditation will open your eyes to the deeper truths of Self-inquiry meditation (Vichara) and Advaita Vedanta as taught by the great sage Ramana Maharshi. Non-dual Advaita inquiry ("Who am I?") meditation in direct line with the great spiritual tradition of Ramana Maharshi is alive and well and being taught face to face in San Diego, California.

"The Yoga of Self-Inquiry: the Essence of Ramana Maharshi's Non-Dual Advaita Meditation for Enlightenment" is a new meditation guide that some may consider radical in its precision and revolutionary in its scope. The Table of Contents will give you some idea why this is so. You Are the Master Or You Are the Slave, The Two-Step Self-Inquiry Technique, Drop the Mind Into the Heart, The First Question: Who Is Having This Experience?, The Second Question: Where Do You Come From?, The Self-Inquiry Road Map, From "Batting Practice" to Falling into the Heart , Resting in the Heart As You Notice Your Thoughts, Noticing the Rising of Every Single Thought, You As the Heart Are the Source of Your Thoughts, The I-Thought Is the Hidden Mastermind or Big Dog Thought, Aham Sphurana: Light, Sound, Pulsation and Truth from the Heart, Sahaja and the Dissolution of the Point of Frozen Attention, Sahaja and the Disappearance of the World, The Joy of Self-Realization, The RASA Revolution, Journey to the Heart of Truth and Meet the Author.
Download: epub mobi (Kindle) pdf more Online Reader
rtf lrf pdb txt
Price: Free! USD
Add to Library
Create Widget
Tags: meditation enlightenment yoga advaita nonduality ramana maharshi nisargadatta maharaj selfinquiry ramesh balsekar
About Ramaji

Ramaji teaches Advaita and non-duality in San Diego, California. There is a monthly Satsang meeting in the area organized via Meetup.com. He delivers the RASA spiritual transmission for enlightenment in person and around the world over Skype and via live video streaming at Ramaji.tv. The best way to reach him is via his web site Ramaji.org.

Ramaji is the author of "1000," a groundbreaking guide to the path of enlightenment and the levels of consciousness from the lowest to the highest. He is also the author of "Who Am I? Meditation" and "The Yoga of Self-Inquiry."

Ramaji works with students all over the world via email and Skype. He has students in Australia, United Kingdom, Scotland, Hong Kong, Singapore, Japan, Russia, Turkey, India, Canada and the United States. The RASA transmission in support of non-dual awakening includes a one hour consultation where you can ask any questions that you want. After you have a Skype RASA session with Ramaji, you have unlimited access to him via email.

RASA (Ramaji Advaita Shaktipat Attunement) delivers the Grace of Divine Mother for rapid spiritual awakening. Although this Grace or Blessing has the power to quickly raise your level of consciousness, it is very gentle. Some people have shifted into enlightenment (abiding in non-duality) immediately after receiving RASA.

Ramaji is also the author of "The Spiritual Heart." It explains the path of Self-inquiry meditation for the Western seeker and goes into depth about the I-thought, the Heart on the right, Kundalini and other important factors that Ramana Maharshi talked about but rarely get discussed in the modern non-duality scene.

His one of a kind meditation guide called "No Mind No Problem" reveals a new way of dealing with the mind that embraces what is while allowing your natural wholeness and happiness to emerge in a fun friendly effortless way. People tired of repetitive methods will enjoy his approach which encourages the empowering joys of creativity, relaxation and self-discovery.

Ramaji also offers free high energy spiritual music at RamajiMusuc.com. Attuned to non-dual frequencies, this music is designed to facilitate your enlightenment. The 8 songs that are free to listen to online are available as an mp3 album called "Supreme Self." One of the songs -- "Supreme Self 1000" -- is a musical rendition of the teachings about levels of consciousness (LOCs) found in Ramaji's book "1000."

Reviews of The Yoga of Self-Inquiry: the Essence of Ramana Maharshi's Non-Dual Advaita Meditation for Enlightenment by Ramaji

You have subscribed to Smashwords Alerts new release notifications for Ramaji.

You can also sign-up to receive email notifications whenever Ramaji releases a new book.