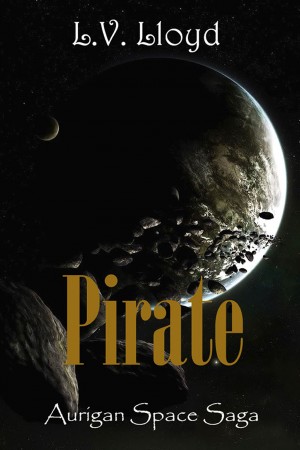 By L.V. Lloyd
Rated 4.00/5 based on 1 reviews
Nicholas Mars was the scourge of the Alnath system. Always just a few steps ahead of the Patrol, being a pirate was simply the best fun Mars had ever had. But now the long-suffering Patrol had sent young, blue-eyed Liam Connell to trap him. Had Mars met his match? M/M Romantic Sci-Fi. More
Undercover agent Liam Connell stared at his captor. He looked like a pirate from a holovid— black trousers, a white, puffy-sleeved shirt, and a purple sash wrapped jauntily around his waist. Wavy black hair fell to his shoulders and ... Connell couldn’t believe it. He actually had gold hoops hanging from his ears. The pirate ran his forefinger lightly down Connell’s cheek and smiled. “Mmm! Mmmm! What do we have here?”
Just what had Connell gotten himself into? (M/M Romantic Sci-Fi)

After thirty years of working with the unemployed, coping with threats, tears and broken lives (and these were only from fellow staff), LV Lloyd decided it was time to make her escape. And what better place to go than the world of m/m romance? She started writing Dangerous Tension, her first ebook, years ago, but put it aside due to work and family commitments.
In 2012, she dusted off the foolscap pages stored under her bed, finished the story and turned it into a book. Since then, she has written six more ebooks in the Aurigan Space Saga series, and numerous short stories. Pirate is the sixth book in the series.
LV Lloyd lives in Adelaide, Australia, with her family and two cats. In her spare time she enjoys fishing and visiting the many local wineries.

All can be read as stand-alone stories, although Rough Play and His Guilty Secret share some of the same characters

My stories all have some m x m action but only Night Traveller is 18+ rated.

Pirate is about Nicholas Mars, a wanted pirate of the high space. His reputation is phenomenal: kidnapper, rapist, a space-age Robin Hood. He is just as cunning and his weakness is someone who appears not to like him as a lover. His adventurous spirit is taking the Aurigan Space by storm. When he steals the Patrol Ship, Ebano, he made a huge mistake. He gets the ire of one Captain Rice who swears (like a character of an opera mind you) that the pirate will regret his actions.

Liam Connell is tasked to insinuate his presence into the Pirate Mars' crew, and maybe his bed. This terrifies Liam as he is straighter than straight. But his assignment is clear, he is to become an undercover agent and present Rice with Mars.

When Nick spots Liam, he likes the type but is hyper aware that this man may just be a plant to capture him. This is a complication because he is very attracted to the younger man. His feistiness and independence is a breath of fresh air. Unfortunately, Liam is found out, and this is where the real story unfolds.

What follows next is a space adventure involving the running and capture of Nick and Liam. I cannot spoil why they are both being sought, you have to read that yourself. Just know that this is not a story connected to the Aurigan Space Series but this does happen in the same space vicinity. The terms are the same, the world is the same. The story is just one of those offshoots to it.

I have to be honest, it took until the 50% of this read before my interest got piqued. It was ho hum in the first half, but it had to be for there were a whole lot of things going on that had to be established. The second half, now that was the real kicker. It was impossible to drop this after that. I persevered for I follow the Space series and was curious: where is the author taking us with this?

Now, for those who are wondering about the ending? hehehhehehhee oh, what an ending! I cannot reveal anything, but I just want to say: that was AWESOME!!!

Overall, yes, the first half was good, but the second half was spectacular. Four stars rounds it up.

You have subscribed to alerts for L.V. Lloyd.

You have been added to L.V. Lloyd's favorite list.

You can also sign-up to receive email notifications whenever L.V. Lloyd releases a new book.