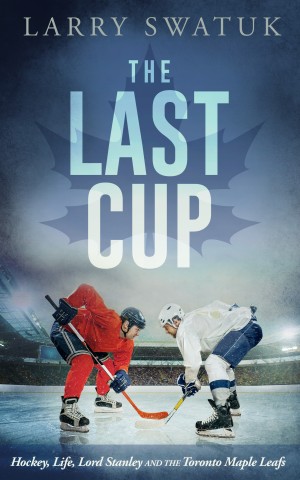 Larry Swatuk was born in Riverside, Ontario, a small town that became part of Windsor in 1967. He grew up on the Detroit River waterfront where his parents ran Island View Tavern, locally known as 'Abars'. He was educated at the universities of Windsor (B.A., M.A.) and Dalhousie (PhD) in Canada. He is currently a professor in the School of Environment, Enterprise and Development at the University of Waterloo. Prior to moving to Waterloo, he spent 14 years in Africa working in various countries, including Nigeria, South Africa and Botswana. He is married to Dr. Corrine Cash and they currently live in Kitchener, Ontario.

The Last Cup - hockey as a metaphor for life

The Last Cup: Hockey, Life, Lord Stanley and The Toronto Maple Leafs opens with Jack laying of the ice being resuscitated after having a heart attack while playing hockey. Jack’s eighty years old and has played, lived and loved the game his entire life.

The year is 2037, and finally The Toronto Maple Leafs are contenders, are actually in the Stanley Cup finals, the first time in seventy years, and their opponent’s none other than their arch rivals The Montreal Canadians. Two of Jack’s nephews, Andrew and Logan are members of the Leafs and the story is told through these three points of view – Jack’s, Logan’s and Andrew’s.

As Jack recovers he’s joined bedside by his old friends and line-mates to watch the games. The reader gets the play-by-play coverage from the perspective of a fan and a player; hockey history and legend from Jack and his cronies; and contemporary insights about the game from the nephews.

This is a story about hockey primarily, but also about family and aging. It uses hockey as a metaphor for family (the team), loyalty (the team), altruism (the team) and the meaning of life (being part of a team). Hockey has given our protagonist everything good in his life – friends, a sense of belonging, recreation and purpose.

Jack also uses hockey as a benchmark for how well he’s aging as in what players and stats he remembers and how his game has diminished over the years. For Jack, a man’s character is also defined by his style of play – either you’re a team player or in it for yourself - playing for personal glory, a dick.

If Jack had another life of any significance off ice author Larry Swatuk is saving it for another book.

Did I like this book. Yes, but primarily because it resonated with me. I’m a Canadian, eh, and was a fan of the original six teams – Chicago was my favorite with Stan Mikita, Moose Vasco and goalie Glenn Hall. I remember the first time a goalie, Jacque Plante of the Montreal Canadians, donned a mask. I played shinny in back alleys and roller hockey on metal skates in tennis courts.

Being from Vancouver the ponds never froze so I never learned to skate. Being poor meant my family couldn’t afford the equipment, the insurance, or the time to take me to rinks for practice at six in the morning. Wouldn’t have mattered, I’m small and was never very good.

Hockey tends to be a bit of an elitist sport (take a look at the ticket prices) and it’s indicative in this novel as well as by who actually plays the game for recreation as an adult – lots of professionals and academics.

Swatuk writes about hockey with authenticity, like an insider, and even though his love of the game may have blunted his objectivity if you’re a hockey fan you’ll enjoy the better part of this book.

His protagonist, Jack, is a well-developed character and there are some interesting passages on aging. But the further you get away from the central theme the more the characters become clichéd and the chauvinism begins to rankle.

Swatuk has a good voice and his narrative is natural, however, he has chose to offset dialogue with dashes instead of traditional quotation marks, which this reader at times found confusing.

I suppose I should get use to it since similar styles are now being used by many acclaimed authors.

This novel is set in the future and the author has some interesting insights as to how the game will develop. Whereas the roster of the original six teams was almost entirely Canadian even though only two of the teams were from that country, no longer is the True North the cradle of the sport. Players hail from Scandinavia and Russia, and the American professionals who make up their Olympic team are our equals.

One thing he didn’t address is the changing face of Canada. Today forty-two percent of Canadian kids aged five to fourteen play soccer while only twenty-two percent play hockey and the gap is getting greater each year.

By 2036 there’ll likely be more Canadians watching the World Cup than the Stanley Cup.

To a natural storyteller, the ultimate compliment you can pay is to ask what happens next. Could not put it down.

On the ice, in the locker room, around the fireplace, Swatuk is note perfect in this authentic tale of passion, dreams, and the love and thrill of the game. A beauty.

You have subscribed to alerts for Larry Swatuk.

You have been added to Larry Swatuk's favorite list.

You can also sign-up to receive email notifications whenever Larry Swatuk releases a new book.