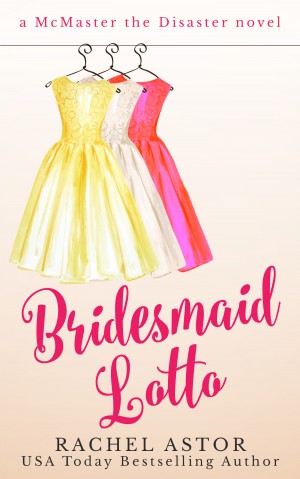 By Rachel Astor
Rated 4.23/5 based on 13 reviews
McMaster the Disaster Series, Book 1

Josie is shocked to be picked in the Bridesmaid Lotto. Now how will she keep her true klutzy self from showing up for all the world to see? More
McMaster the Disaster series, Book 1

Josephine McMaster is pretty and smart, but very much a klutzy mess. Finally, at 26, she may have actually lost the dreaded ‘McMaster the Disaster’ nickname that has followed her around her whole life.

Josie’s quite content to be single, much to her mother’s disappointment. So when a bizarre contest is announced where a socialite is holding a lottery to pick her bridesmaids (and rake in a little extra cash), she can’t roll her eyes fast enough, even if it does mean meeting Jake Hall, her one and only movie star crush. Obviously, Josie doesn’t enter the bridesmaid lottery, so you can imagine her surprise when her picture pops up among the winners, thanks to Mom. With a little prodding -- okay bribing -- Josie agrees to participate.

The wedding turns into the event of the year, and Josie finds herself in the middle of a paparazzi feeding frenzy, which gets even crazier after Jake Hall takes a special interest in her.

Can Josie handle the pressure in the spotlight? Is it possible she might really have a chance with Jake Hall? And if she’s busy worrying about all that, how in the heck is she going to keep ‘McMaster the Disaster’ from showing up in front of the entire world?
Download: epub mobi (Kindle) pdf more Online Reader
rtf lrf pdb txt
Price: Free! USD
Add to Library
Create Widget
Tags: chick lit disaster wedding contemporary romance bride beach read 99 cents contemporary women bridesmaid bridesmaid gift

Also in Series: McMaster the Disaster

Not a bad story, unfortuantely not as uncommon a premise!

A fun read. Predictable but enjoyable getting to the end anyway. Needs better editing but the flow of the book isn't too interrupted by it.

I liked that the heroine wasn't perfect but she was still a bit too perfect in appearance and, of course, the male lead was the ultimate super movie star. It made it a little harder to root for them. But their adventures were fun. I laughed out loud a few times.

(review of free book)
sofie gijs reviewed on Dec. 5, 2011
(no rating)
I really enjoyed reading this book! It is a read perfect to just relax and enjoy after a day of hard work or studying!
I think some parts are a little predictable, but hey, if the outcome is otherwise you are disappointed, so it does not matter at all (to me!)
It is also nice that it is written in a rather informal style!
And well I have to admit, that I’m dying to read part 2!

(reviewed 2 days after purchase)
sofie gijs reviewed on Dec. 5, 2011
(no rating)
I really enjoyed reading this book! It is a read perfect to just relax and enjoy after a dayof hard work or studying!
I think some parts are a little predictable, but hey, if the outcome is otherwise you are disappointed, so it does not matter at all (to me!)
It is also nice that it is written in a rather informal style!
And well I have to admit, that I’m dying to read part 2!

Bridesmaid Lotto was a really fun and lighthearted read. I loved Josie as a main character and she just felt so real to me. I loved that she was prone to accidents and embarrassing herself in public – who isn’t? – and her Disaster Diary provided some welcome comic relief. Josie really did not want to be a part of the Bridesmaid Lotto but eventually the glitz and glamour (and of course the chance to meet her long time movie star crush) wins out and she surrenders to the parties and the designer dresses. While she does get caught up in the excitement preparing for the wedding I was happy to see that she didn’t completely loose herself. She still reminded herself of who she was by writing about her misadventures in her Disaster Diary and she remained relatively grounded considering the situations she found herself in. I absolutely loved Josie’s friend Matty, he was the token gay best friend, but his character was done so well. He wasn’t too over the top and added just the right amount of humor.

The love story was a little predictable but it was well done so I didn’t mind. It was nice for a change to read of a main character who isn’t completely tortured and damaged and suffering in an emotionally draining relationship. Josie’s relationship was the kind of story that makes you *sigh* and wish you were in her shoes. Sometimes we all need a little bit of a fairy tale.

I don’t often read Chick LIt but I am so glad that I read Bridesmaid Lotto. It was the perfect combination of humor, wit, and a little bit of romance. I can honestly say that I am looking forward for the release of the next book in the series Gamble on Engagement, which is expected to be released in August, 2011. I would recommend this book to anyone who is looking for a light and fun romantic comedy.

I received a free copy of Bridesmaid Lotto from the author (thank you!) in exchange for an honest review. All opinions are my own.

Josie is entering into a contest to become a bridesmaid for celebrity wedding by her mother. After winning she is then throw into the world of fame, fashion and paparazzi. She enters into a romance with Jake a film star and brother to the groom.

This was a light, frothy, fun and enjoyable novel.

(reviewed 40 days after purchase)
RAVENSWOOD PUBLISHING reviewed on May 23, 2011

When Josie MacMasters is reluctantly entered into a contest to become one of the bridesmaids of a rich debutante she doesn't realize until too late just how insane the entire process is going to be. With the wedding looming 3 months away she is harassed by papparazi, looked down upon by her peers, and thrown knee deep into a world she'd rather not be a part of. All this becomes a little better when she meets Jake Hall, the object of her one true desire.

This story is wonderfully written and fun! It contains just the right balance of humor, real life, and romance. A definite must read for those that love chick-lit and romance!

Bridesmaid Lotto is a great treat to read. It is a very romantic novel that will have you glued till the end. I actually finished this book in one day which I usually don't do. I am look forward to a movie based on this novel and other novels by Rachel Astor. This is a very cute story about Josie McMaster's journey through her experience of being a bridesmaid for a famous movie star. I would definitely recommend this book to anyone and every one.

You have subscribed to alerts for Rachel Astor.

You have been added to Rachel Astor's favorite list.

You can also sign-up to receive email notifications whenever Rachel Astor releases a new book.