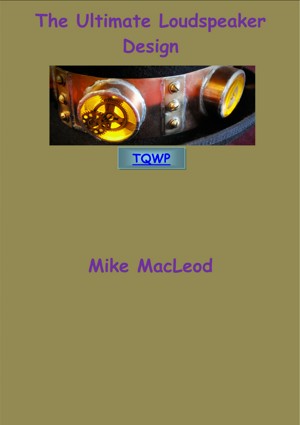 By Michael MacLeod
A loudspeaker that stands head and shoulders above all others. A folded Voigt Tapered Quarter Wave Pipe with the 'trickest' crossover giving clarity never before heard with a sound stage that is alive and wider than the speakers themselves. Hear the brilliant midrange that makes instruments like the piano come alive or the sound of the strings being strummed on a classical guitar. Just imagine... More
Have you ever taken notice of horned instruments like trumpets, trombones, French horns etc; they’re basically a long flared pipe that gets wider and wider along its length. This allows the sound to be amplified and travel some distance.
This is the basis of the tapered quarter wave pipe, a new look at the Voigt Pipe. This DIY guide Includes the trickest crossover, with formula and layouts.
Build this loudspeaker and be astounded at how good they sound with midrange clarity and a soundstage wider than the speakers themselves. Ideal for small rooms where space is at a premium. Includes free software and plans.

Michael MacLeod was born and educated in Benoni, South Africa. After completing his military training as an infantry soldier at the 2nd South African Infantry Battalion in the deserts of Walvis Bay, Namibia and seeing action in the ‘Border War’, he became an aircraft maintenance engineer and worked for one of the world’s leading international airlines before retiring. He has travelled South Africa extensively. Among his other interests are designing and building of aircraft, electronics, clock making, woodworking and is also a part time inventor.

You have subscribed to alerts for Michael MacLeod.

You have been added to Michael MacLeod's favorite list.

You can also sign-up to receive email notifications whenever Michael MacLeod releases a new book.