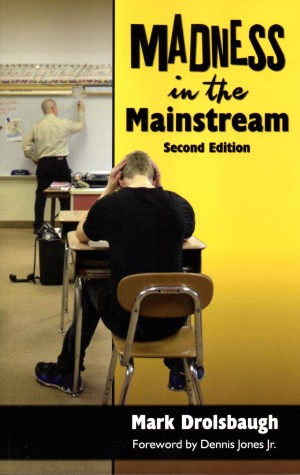 Madness in the Mainstream

Madness in the Mainstream is a rare account of what goes on behind the scenes. Deaf author Mark Drolsbaugh pulls no punches as he reveals the consequences of life in the mainstream for deaf and hard of hearing students.

Mark Drolsbaugh graduated from Gallaudet University with a B.A. in Psychology (1992) and an M.A. in School Counseling and Guidance (1994). An avid writer, Mark has had numerous articles published in national deaf publications such as DeafNation, Silent News, and SIGNews. He wrote his first book, Deaf Again, in 1997. In 2004 Mark published Anything But Silent, an anthology of his work as a newspaper columnist. He then collaborated with a team of other writers to publish On the Fence: The Hidden World of the Hard of Hearing in 2007. His fourth book, Madness in the Mainstream, was completed in 2013. A second edition of Madness in the Mainstream was released in 2015.

Reviews of Madness in the Mainstream by Mark Drolsbaugh

You have subscribed to alerts for Mark Drolsbaugh.

You have been added to Mark Drolsbaugh's favorite list.

You can also sign-up to receive email notifications whenever Mark Drolsbaugh releases a new book.