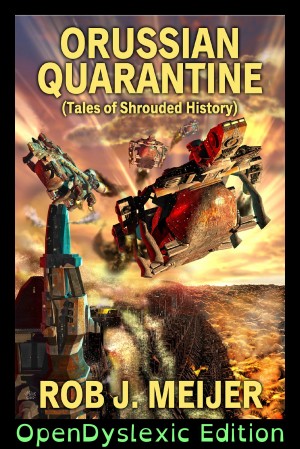 By Rob J Meijer
This is a special version of "Orussian Quarantine" aimed specificaly at cognitive impaired readers. If you don't suffer from any form of dyslexia, please purchase the regular edition instead. More
The Orus system’s Orussians had found a brilliant way to harness the power of labor by engineering ant-monkeys, a hard-working and unswervingly loyal slave species—until the uprising.
Having further manipulated the genes of her own male ant-monkey, Inoatar, and granting him free will, bioscientist Uriëlla has grievously breached the code of conduct. The barbaric penalty for these acts would not only involve her, but her entire clan as well. As a result, she must wrestle with emancipating Inoatar despite desperately needing him.
The uprising, Uriëlla’s actions and their subsequent fallout lead to a struggle of biblical proportions which promises to forever alter Orus civilization.

Rob is a software-engineering professional who pays his bills by building computer forensic and information security products.

Rob's first two shorts are an homage to the memory of his father an atheist who entertained let’s say rather SciFi-ish ideas about the origin of man. During a 6-week stay in west Africa, the soaring heat combined with the tiny ants that kept infesting his apartment and local customs helped Rob find the inspiration for turning what he remembered from his father’s wild theories into a coherent SciFi story. Since then Rob has continued to work on a series of shorts with related subjects that he hopes to one day release as a printed bundle.

While Rob loves both technology and his e-books, he feels a big draw to the idea of holding a self-published book in his hands and feeling and even smelling the reality of it. His ultimate goal is thus to self-publish a bundle of seven shorts that he can hold in his hands and smell ;-)

About the Series: Tales of shrouded history: OpenDyslexic editions

What if parts of our history are shrouded. What if scripture and mythology lift a tip of the shroud? What could our history have been like and what impact will that have on our future?. Each of the eventually seven stories in this series will answer these questions in its own distinct way.

You have subscribed to alerts for Rob J Meijer.

You have been added to Rob J Meijer's favorite list.

You can also sign-up to receive email notifications whenever Rob J Meijer releases a new book.