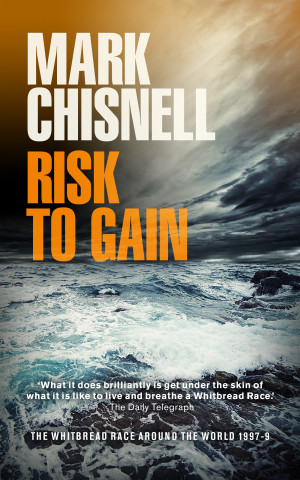 ‘Big pressure on you,’ yelled hoarsely.
Then more urgently, ‘Big gust!’ A curse. ‘Thirty-eight knots, still building. Big pressure, look at the goddam speed! You wanna blow it!’
‘No, I’ve got it! I’ve got it. Ease! Ease!’
The winch drum howled. The boat had shaken herself at a frequency that shouldn’t have been physically possible for something that size, and then taken off. The note of the whole boat changed, the pitch of the vibration clattering pencils and dividers out of the navigation station, rattling teeth and gums. I grabbed the edge of the bunk, tensing my legs against the bulkhead. I could feel the others doing the same. If we lost it at this speed it would be really messy.

Stomach-churning storms, frustrating calms, broken gear, shattered hopes and stunning victories - Risk to Gain is the story of the men and women aboard two boats sailing around the world in the classic Whitbread Race. Travel with them on their voyage and gain a unique insight into their inspirational journey:

Sweat more than you can possibly drink, battling to fix a broken water-maker in the tropics.

Struggle to wrestle a ton of sails back out of the frozen wastes of the Southern Ocean.

Cross the line in the Southern Ocean and learn that a man can pay the ultimate price.

Break a mast thousands of miles from help, and you are a sitting duck for the next storm.

Walk the line and sweep around Cape Horn with a race winning, three day lead.

This brand new, text-only, eBook edition of the original, highly-illustrated Risk to Gain remains the classic account of Team EF's victory in sailing's 1997-98 Whitbread Race and is probably the most vivid written record of the world’s greatest ocean race ever produced. It’s the first of two accounts of round the world races written by Mark Chisnell, the second is ‘Spanish Castle to White Night.

Reviews for Risk to Gain.

‘There are many accounts of man against the sea, and man against man at sea, but seldom has there been such a panoramic portrayal of life at its cramped, frenetic and frightening worst as this examination of the latest winning Whitbread Round the World Race campaign’
Stuart Alexander, Independent, ‘Sports Book of the Week’.

‘What it does brilliantly is get under the skin of what it is like to live and breathe a Whitbread Race.’
Tim Jeffery, The Daily Telegraph.

‘It’s the best book yet on this race. Great writing...’
Yachts and Yachting.

Well presented to give you a feel for this challenging race.An excellent read.