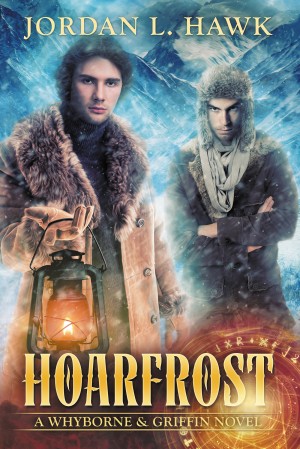 Rated 4.50/5 based on 2 reviews
Whyborne and Griffin must travel to Alaska to save Griffin's brother from the guardians of a mysterious artifact. More
Sorcerer Percival Endicott Whyborne and his husband Griffin Flaherty have enjoyed an unprecedented stretch of peace and quiet. Unfortunately, the calm is shattered by the arrival of a package from Griffin’s brother Jack, who has uncovered a strange artifact while digging for gold in Alaska. The discovery of a previously unknown civilization could revive the career of their friend Dr. Christine Putnam—or it might kill them all, if the hints of dark sorcery surrounding the find are true.

With Christine and her fiancé Iskander, Whyborne and Griffin must journey to the farthest reaches of the arctic to stop an ancient evil from claiming the life of Griffin’s brother. But in the rough mining camp of Hoarfrost, secrets fly as thickly as the snow, and Whyborne isn’t the only sorcerer drawn by the rumors of magic. Amidst a wilderness of ice and stone, Griffin must either face his greatest fear—or lose everyone he loves.

I have no idea why it took me so long to start this book, but I know why I finished it in a very short amount of time: because it's just so good!

Most books about the same characters tend to lose their sparkle. Somehow Jordan L. Hawk keeps each new book fresh and exciting. Hoarfrost, book 6 of Whyborne & Griffin takes our intrepid duo as well as Christine and her fiancé Kander to the wilds of Alaska. Why? To stop an ancient umbra from breaking out of its seals on the longest night of the year.

Once again Ms. Hawk sprouted an amazing story with twists and turns. This time, though, she did something a little different. While she has written short stories from Griffin’s POV, most W&G are from Whyborne’s POV. In Hoarfrost, she did alternating POVs between Whyborne and Griffin. I have to admit, I struggled with it. They were both 1st person POV and half the time I kept trying to figure out who was the person telling that particular part of the tale. That is the only reason this got 4 stars rather than 5. Because it continued to be confusing all the way through.

It’s still a tremendously wonderful story, though darker and less ‘fun’ than other stories have been. I found the same humor within Whyborne’s POV, but it was missing from Griffin, which makes sense because the man is still in a tremendous amount of pain from all the loss in his life.

I applaud this new character – the reverend who is also a member of an arcane order. I look forward to see what comes about with him. And, of course, the wedding of Christine and Iskander – surely that will be fraught with amusement, especially with Whyborne standing up with her! And lastly, does anyone wonder if Whyborne will ever figure out why Miss Parkhurst is so good to him? :)

I look forward to the next installment in Whyborne and Griffin. Even though I am sure they will be attacked with creatures unseen, hopefully it will once again be filled with the whit of one Percival Endicott Whyborne.