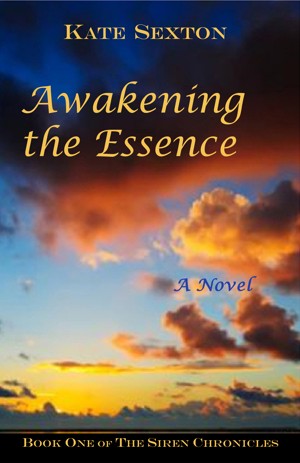 Awakening the Essence:Book One of The Siren Chronicles

By Kate Sexton
Demonstrating a gift for the creation of legend, Sexton delivers a hypnotic novel of mysteries and profound knowledge based on fact, and brings to life a legendary dynasty of strong women. With a dreamlike power, the novel draws us through circuitous, dusky paths to the present. Through peril, tension and escape there swirl echoes of eternal war; innocence versus evil, and life versus death. More
Millennia ago women were honored as matriarchs and the leaders of nations. Respected and powerful. Today women fight for an equal role in society, their power suppressed, their intelligence hidden, and their voice muffled. Why? Was it simply the vagaries of history or a secretly executed plan?

Demonstrating a gift for the creation of legend, author Kate Sexton delivers a hypnotic novel of mysteries and profound knowledge based on fact, and brings to life a legendary dynasty of strong women. This is the tale of a family given to history and mythology, to murder and forbidden wisdom, to song and philosophy; a family that is itself haunted by a dangerous and secretive enemy.

Rory Forsythe, a beautiful woman and successful entertainment executive, awakens from a car accident to discover she has acquired sensory abilities that both mystify and frighten her. Unsure and shaken, she is catapulted violently into a worldwide power struggle that began eons ago.

With handsome Irishman Kelsey O’Keefe at her side, Rory takes up the hunt for the hidden location of a venerable family fortune. As these two – fiercely drawn to each other, fall in love and set out to solve the mystery of her past – the novel moves backward and forward in time from today’s Los Angeles and Lyon, France to atop an ancient temple in Babylon and a tribal circle of judgment held 8,000 years ago.

Rory’s increasingly inspired yet dangerous moves in this ruthless game bind her to her heritage and the priceless legacy she was born to protect – The Siren Chronicles.

With a dreamlike power, the novel draws us through circuitous, dusky paths to the present. And always – through peril, tension and escape – there swirl around us echoes of eternal war; innocence versus evil, sanity against madness, life versus death.

Based on twelve years of research, Kate Sexton weaves a story filled with truths drawn from findings in archeology, linguistics, anthropology, myths and religions to reveal a stunning conclusion about the true history of the western world, the women who created the original civilizations, and the men who destroyed it.

Kate Sexton embarked on the journey that would lead her to write this book at age ten when she confronted local religious leaders, refusing to become baptized without verifiable justification for dedicating her life to Jesus. Over the next four years she voraciously studied world religions, often forced to hide books inside the covers of others at the library, until she reached her own conclusions about life and god. In the end, she shared her Aunt Nell’s core belief that nothing lasts forever.

These findings satisfied Kate until a boyfriend introduced her to Hero with a Thousand Faces by Joseph Campbell. This began a ten-year quest for knowledge that would lead to the first drafts of The Siren Chronicles. The deeper Kate delved, the more she detected a theme—the mysterious origins of the Indo-Europeans, the destruction they wrought in their quest to dominate the civilized world, and their brutal suppression of women.

During her years of research Kate discovered Marija Gimbutas’ groundbreaking archeological findings, Bryan Sykes genetic work, numerous authors on linguistics and the origins of Indo-European languages, Merlin Stone, James George Frazer, and so many others whose works, each dog-eared and marked with highlighter, now fill seven bookcases.

Reviews of Awakening the Essence:Book One of The Siren Chronicles by Kate Sexton

You have subscribed to alerts for Kate Sexton.

You have been added to Kate Sexton's favorite list.

You can also sign-up to receive email notifications whenever Kate Sexton releases a new book.