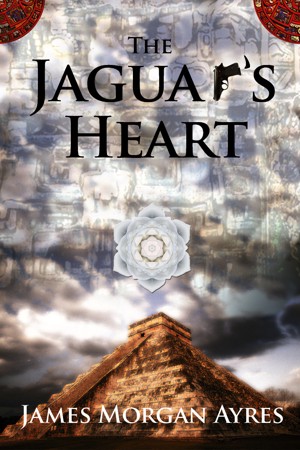 Jesse J. Rideout, former covert operator now a fugitive and artifact smuggler, must undergo a mind-bending transformation to learn if the cult leader has real occult power or if his followers are deluded by exotic hallucinogens, and then destroy an ancient horror to avert a war between the United States and Mexico.

Katarina Castillo, daughter of the aristocracy, is Jesse’s partner in their desperate attempt to stop the cult, which has subverted the highest levels of U.S. government. Their only ally is the secretive Society of the White Rose, sworn enemy of Sangre de Dios.

James Morgan Ayres, using a variety of pen names, has written over a hundred articles and short stories, five books, two shows for television and more commercials than he cares to number, or remember. He worked in Latin America, Asia, and Europe as a consultant for U.S. Government agencies and private corporations. Once a soldier, he served with the 82nd Airborne Division and the 7th Special Forces Group (Green Berets). In parallel lives he founded and sold four companies with international operations and has traveled or sojourned in over forty countries.
Morgan attended various institutions of higher learning including Howard University and U.C.L.A. and has studied with masters of martial arts and meditation for over twenty years. While in college he worked as a truck driver, a sponsored sports car race driver, archeologist's assistant and ghostwriter. He has taught martial arts, meditation and Eastern philosophy, survival and defensive shooting. Before hopping a freight train at fifteen out of a mid-western state he was employed as a newsboy, strawberry picker and crow hunter.
After a couple of decades knocking around boardrooms and back alleys from Beijing to Zagreb, Morgan now spends his time writing, traveling and continuing as a lifelong student of almost everything. He has read a hundred or so books a year since childhood, enjoys French wine and greets every day as an adventure.

Reviews of The Jaguar's Heart by James Morgan Ayres

Fantasy, Adventure and a love story all rolled into one!

The book is set in 1968 Mexico with real historical events as a background, including the October 2 massacre of students at Tiatelolco.

Mr Ayers has obviously done his homework into Meso-American civilization, his personal experiences in Mexico lend credibility to the observations of the main character Jesse J. Rideout. As I wandered deeper into Mr. Rideout's world and his encounters with sorcerers and curanderas (traditional Native American healers or shamen in Latin America), I was reminded of the popular series written by Carlos Castaneda about Don Juan Matus. I then encountered one of many short sweet surprises found sprinkled throughout the book; Mr. Castaneda himself!

Mr Ayer's words grabbed me from the start, he is a "wordsmith" who is crafty and subtle in his use of simile and metaphor. A couple of examples of many favorite lines that I read and re-read, savoring the images they evoked were; "...one of those perfect moments when all things hang suspended in crystalline perfection, like the lingering vibration of a struck bell after is sound has faded..." and "Revenge is a dish best served cold."

Mr Ayer's familiarity with the military jargon of the "special" operative was authentic. Mr Ayers was a member of the Army Special Forces (SF) and so was I. One such example of these phrases include; "Suddenly the back of my neck went to ice, I was walking point and someone had me in his sights." Another was as Ms Katarina Castillo (Kate) has started to realize that there is far more to Jesse Rideout than meets the eye. She questions Jesse about why he is carrying his gun when all they are going to do is go out: "You're carrying it today?" (She asks) "I carry it all the time." (Jesse answers) "You planning to shoot someone today?"(She returns) (Jesse then asks her:) "Do you have insurance on your Jag?" "Of course"(Kate answers) (Jesse replies) "Planning to have an accident today?"

Finally what I admired most about this book was that it is NOT about some vigilante, seeking retribution and cold-blooded in his killing, but rather narrates the conflict constantly Mr Rideout feels within himself. He narrates at one point "Evil done in the service of good is still evil." Another example is when he talks with Dillon, a former SF team sergeant of his and Dillon says "Your problem is you have too much heart. You bleed more than your target."

Mr Rideout is also not a "James Bond" operative but rather one who knows he is well trained yet, realises his fallability and expresses fear or has doubts about his ability to carry through with some, often dangerous or difficult, objective. He also has few illusions about the integrity of the politicians and others who keep their hands clean while others do extremely dirty work in the name of "patriotism."

The Jaguar's Heart is an exciting ride through fact, fiction, fantasy and more than enough reality which made this a real page-turner for me. Get a copy and see for yourself.

When I first started reading this book I really wasn't sure what genre to describe it as: at times I would have said thriller, then I would think it was more fantasy. Finally though I have settled on describing it as a fast paced exciting adventure story that reminded me of the Indiana Jones franchise. For example, the book is set in an historical setting and there are exotic locations, archaeological discoveries, political intrigue, occult sorcery & some really enjoyable action scenes.

The story itself follows Jesse J. Rideout, a former covert operative who is hiding in Mexico after an altercation with his US governmental employer. His amateur interest in archaeology leads him to uncover a secret society full of politicians and criminals who believe in the sorcery once practised by the pre-Columbian natives in Central America. The reader then gets taken on an enjoyable journey across Mexico as Jesse attempts to get revenge for the death of a close friend and understand what this secret group are really up to and why they seem determined to get a hold of an artefact he has uncovered.

I have to say that I really enjoyed this book; it was delivered brilliantly with a superb mix of thrills, mystery, fantasy, action and drama. More importantly though, it had a gripping plot that was fun to read: I struggled to put it down several times and found that it really was a page-turner. In addition, it really felt like the author knew Mexico, it was wonderfully detailed and there was a love and warmth for the country that really came through in the novel.

The characters were well defined and quite memorable with Jesse himself really coming across like a mix of Indiana Jones and James Bond. But it was more than just him, all the characters seemed to have clear motivations that made sense with everyone having a purpose and specific drive. There were no ornamental characters; the female characters especially were strong, independent women who knew what they wanted and how to achieve it which was nice to see as sometimes I have seen adventure books use the women screaming, moaning side-kicks.

In summary, this book was an enjoyable, entertaining, fast paced adventure story that has me turning the pages with anticipation. In addition, the writing itself was decent and the author has crafted some superb characters. Simply put, if you like adventure stories then I think you would love this book and should therefore pick it up for a read.

I was really pleased with this book, and enjoyed it a great deal. I enjoy thrillers, and this book delivered. The story was compelling, and moved along quickly. The characters are well-drawn and memorable; their motivations are clear and make sense. Jesse, the central character, has been around the block more than once, and ends up in a situation where his unique skills become essential for not just himself, but for nations.

It's clear that the author is familiar from personal experience with both the book's setting (Mexico) and with covert operations. Whether he is personally conversant with the book's more mystical trappings, I can't say. But I will say that it's a fun and engaging read. Recommended.

I agree with the previous reviewer that the book seems to be a good basis for a movie. That's not always a good thing (some books are better left as books!), but in this case, with the right filmmaker, it would make a fine action flick.

(reviewed 23 days after purchase)
scottbfree1 reviewed on June 5, 2011
(no rating)
I came upon this novel on "Smashwords" and I believe it to be a first book by a Mr. James Morgan Ayres. If this is a first attempt at publishing, Mr Ayres has a very bright future indeed. This book is, in the parlance of the trade, a real page turner. To me it is as gripping and as well crafted as any novel I've read in a long time. Perfectly set to be produced as a film, or for a follow up novel using the same strong character.

"A Jaguars Heart" is a winner. Congratulations Mr. Ayres.

You have subscribed to alerts for James Morgan Ayres.

You have been added to James Morgan Ayres's favorite list.

You can also sign-up to receive email notifications whenever James Morgan Ayres releases a new book.