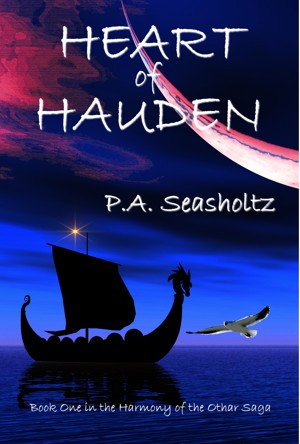 Heart of Hauden (Harmony of the Othar Saga #1)

By P.A. Seasholtz
Rated 5.00/5 based on 2 reviews
The short peace between the Houses and the Nations is ending. The rekindling of the eternal fires has awakened the Othar, but the flame of prejudice still burns, threatening to consume Hauden in a conflagration of blood. All must unify so the Othar can speak with one voice, for only with the harmony of one voice can the stasis of Oseronni be broken, restoring the natural cycles of life and death.
Available ebook formats: epub mobi pdf rtf lrf pdb txt html
First 10% Sample: epub mobi (Kindle) Online Reader
Price: $0.99 USD
Buy Add to Library Give as a Gift
How gifting works
Create Widget
Tags: fantasy fantasy series saga series books hauden harmony of the othar saga book one fayersae seasholtz
About P.A. Seasholtz

Living quietly in a Minneapolis suburb, I have been writing the Harmony of the Othar Saga in various incarnations for more years than I am willing to admit. A story which began in college has, after many years, reached fruition with my first novel, Heart of Hauden. During the intervening years, I have helped raise my daughter, Katja, with my wife, Ann, worked in the information technology field, primarily as a database administrator, and received the support of friends and family to write as time permitted.

Reviews of Heart of Hauden (Harmony of the Othar Saga #1) by P.A. Seasholtz

THIS WAS A VERY GOOD BOOK, VERY WELL WRITTEN. THERE ARE MANY CHARACTERS, BUT IT DIDN'T TAKE LONG TO SORT THEM OUT. I WOULD DESCRIBE "HEART OF HAUDEN" AS A FANTASY/MYSTERY AND I ENJOYED READING IT - AND LOOK FORWARD TO BOOK TWO.

I really liked this book. The writing is very descriptive and I could really visualize what was happening on the page. The characters are interesting and diverse and I can't wait to see what happens in the second book. I highly recommend this book to everyone!

You have subscribed to alerts for P.A. Seasholtz.

You have been added to P.A. Seasholtz's favorite list.

You can also sign-up to receive email notifications whenever P.A. Seasholtz releases a new book.