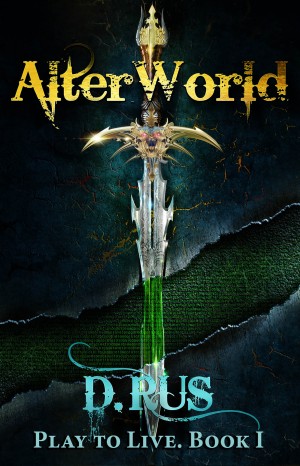 But some unfortunates - the handicapped and the terminally ill, shell-shocked army vets, wronged crime victims and other society misfits - choose to flee real life willingly, escaping to the limitless world of online sword and sorcery MMORPGs.

Once a seasoned gamer and now a terminal cancer patient, Max grasps at this final chance to preserve his life and identity. So he goes for it - goes for the promise of immortality shared with a few trusty friends and the woman he loves. Together they roam the roads of AlterWorld and sample its agony and ecstasy born of absolute freedom.
Download: epub mobi (Kindle) pdf more Online Reader
lrf pdb txt
Price: Free! USD
Add to Library
Create Widget
Tags: sword art online litrpg log horizon moonlight sculptor ready player one vrmmo
About D. Rus

D. Rus is a young Russian author whose books took the Russian literary market by storm in 2013. AlterWorld - the first novel of his Play to Live series - made him a bestselling author overnight as critics now credit him with single-handedly creating a new science fiction genre: LitRPG.

Set in the virtual reality of MMORPG - Massively Multiplayer Online Role-Playing Games - his books tell stories of real people who'd become stuck in the game and are forced to follow its rules while preserving their intergrity and fighting to make their new world a better place.

The five books of the series have created a huge following as more authors followed suit, making LitRPG the latest bestselling Russian genre that merges science fiction, fantasy and gaming conventions. D. Rus has been nominated for Start, one of Russia's prestigious literary prizes for the best debut science fiction novel.

The first three novels of the Play to Live series - have been translated into English, and talks are under way to have the rest of the series published on Amazon.

About the Series: LitRPG: Play to Live

Once a seasoned gamer, Max has cheated fate swapping his dying body for an immortal avatar in the world of sword and sorcery MMORPGs. He joins the ranks of a new race of people: perma players, forever stuck in the virtual castles and cities of AlterWorld. Now they have to obey the ever-changing rules of their new home while learning to live together in peace, love and justice.

Overview: I was looking for an ebook with a cyber-twist when I came upon this one. I only skimmed through the description, acquired the book and downloaded it, so I could read it with no idea of what I was getting into, mostly for the novelty / surprise of it.
Plot: A terminally ill man decides to forego his physical body to become a permanent part of a video game.
The Bad: This ebook was translated from the Russian language. The translation effort is actually very good, but every so often, I came across a phrase that read awkwardly. This is a minor quibble. Overall, the translation is excellent.
After reading the description and the first five pages of this book, I felt I was getting into a mild cyberpunk story. Unfortunately, the moment the main protagonist entered Virtual Reality, the sci-fi part of this novel was over. 99% of the story takes place in a medieval, sword and sorcery fantasy world based on dungeon crawler games such as Blizzard’s Diablo. This would have been okay if I’d been ready for it. On top of that, the author placed me into an immersive video game environment. By immersive, I mean nearly every page has a repetitive, computerized message on it, telling me how the protagonist’s relationship has changed toward other players / clans, and what sort of statistics are on new items he’s acquired, along the lines of You've been attacked by another player! Self-defense doesn't affect the PK counter!
Don’t get me wrong. The Diablo II video game is my all-time favorite, so I’m not knocking the idea of a game environment. Despite this, I would say that the game jargon is too specialized for a casual reader. There are too many abbreviated terms and too many instances where a reader is expected to know the intricacies of how an online VR world operates. This novel was written by a seasoned gamer for other seasoned gamers, people who know what things like leveling up, DoT, MMORPG, +1 to Spirit, etc., mean.
The novel is written from a first person perspective. The problem here is that the author has a lukewarm approach to everything. Think of a gameplay video on Youtube, where you have the host saying, well, I’m going into the cave now, and I’m fighting against a really big monster, and I’m hurt, and now I’ve raised my health back up. There is very little emotion in this narration, very little detail that really hooked me into caring for the main character or others. If it weren’t for the fact that I like medieval fantasy games, this book would have been extremely boring.
The protagonist gets lucky every single time. He’s a Dark Knight Necromancer, by the way. At level 5, he gets a level 30 pet and wastes his opponents. At level 30, he gets a level 120 pet and does the same thing. When the protagonist enters a player versus player competition against an entire clan, even though he is supposedly new to this game, guess what, he beats all four of his veteran opponents with only minor resistance. That clan sucks!
The protagonist never gets crushed, he never has to train, he rarely has to come up with intelligent solutions. Basically, he routinely finds or other players give him godly gear so he can keep tap-dancing over his opponents. Oh, and he creates cigarettes in his VR world, because everybody wants them and nobody has been smart enough to invent them yet, and of course this upsets the world economy and our hero becomes the center of the universe, yet again.
I’m not sure if this has to do with the book originally being written in Russian, where the idea of juvenile humor might be different, but we get some really odd phrases, such as: as sad as a panda without bamboo, I was a dork to end all dorks, and leaving him there felt like pulling tails off puppies. When the author describes digital sex, it’s weird stuff like ‘an untiring body,’ ‘an eternal bliss.’
You might not like the cliffhanger ending, but I had invested so little emotion in the story that it was more of a meh moment. Every character has the same personality, nobody grows in any meaningful fashion, everything, and I mean everything, goes the protagonist’s way, and the entire thing reads more like a colorful game manual than a typical fantasy novel.
The Good: If you think you’d enjoy reading a first person walk-through of a fantasy game, you might like this book. The author does have a decent outline of a story, there is a progression as far as the leveling up goes, and he presents interesting viewpoints regarding the game’s economy and politics. For me, the book really shines in the cyberpunk ideas it presents, things like terminally ill people transferring their minds into video games, the horror of the game getting hacked and life-data being lost, and permanent digital characters interacting with people in the physical world to get real things done, such as taking care of loved ones, money transfers and assassination attempts. This book has a lot of imaginative concepts in it that a writer such as myself can roll around in my head and expand upon in future stories, and that gives it a big plus that negates a lot of the stuff I didn’t like.
I did not love this book, but I didn’t hate it either. It was more of a middle of the road story that has a lot of potential to it, if the author figures out how to reach out and grab the reader, and pulls the reader into the scene with him.

I could not put it down and am going to buy the other two!

The tale starts with a young man being told he has a short time to live around the time a large number of people are being lost in virtual reality. I was not sure initially whether I would enjoy this having never played the sort of game related in the story, but this is not just about a mmorpg, it is also about discovering how to survive in a world unlike Earth. There is love, friendship, trust, enemies and betrayal. Capitalism and philanthropy are both there, as is the larger fight between good and evil with perhaps a bit of a grey area.

I heartily recommend this to anyone who has enjoyed a classic fantasy or alien worlds book. Elements of both genres can be found here.

You have subscribed to alerts for D. Rus.

You have been added to D. Rus's favorite list.

You can also sign-up to receive email notifications whenever D. Rus releases a new book.