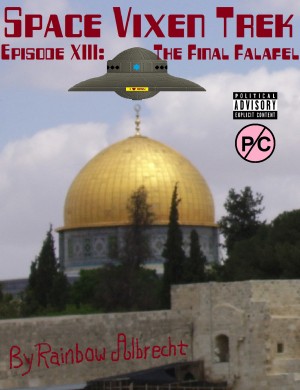 Will the friends end up broke and stranded abroad? Will the "Messiah" get the tour group following him, or will he get himself lynched? Can nuclear war be averted?

*** The missionaries came by

"After a few more rounds, they showed me how to do the secret handshakes from the Mormon Temple. They even showed off their magic underwear."

"Ain't that a hoot! So what happened after that?"

"Well, as we finished my stash, Elder Berry announced that he had a crush on his companion. Elder Bush said he doesn't swing that way, but Elder Johnson offered him a BJ once, so he should be DTF. Elder Berry was delighted to find out, and wondered how his gaydar didn't ping Elder Johnson from the beginning."

*** The nerd discovers his Jewish roots

"Look on the bright side. Now that you're Jewish, you have a chance with Mila Kunis and Natalie Portman."

Karl snapped out of his guilt fit. "Awesome!" He smiled broadly.

"And Roseanne Barr too."

"The problem with the Christians is they don't realize that Issa, peace be upon him, was a prophet and no more. But y'all got the worst part of the bargain there. Muhammad, peace be upon him, said the Jews were like a donkey carryin' a load of priceless books but didn't have no use for 'em."

Karl glanced at him crossly. "I wouldn't be making statements like that too loudly if I were you."

"You suppose someone might rat me out to that there Anti-Defecation League or somethin'?"

"So, are you a Shi'ite, or are you just being the same thing with two fewer vowels? If so, maybe you'd better visit the Ayatoilet."

*** Their classmate is off his meds

"All this hoopla about the two thousand year old dead Jew on a stick!" exclaimed Ludwig. That got him some shocked stares.

"He wasn't one of us!" insisted Karl. "That's like saying Martin Luther was a good Catholic all along."

"So what was he then? Not that I really give a toss."

"Yes indeed. Jesus was as Italian as fettuccini Alfredo. It says so in one of our ancient writings, the Toledoth Yeshu. That's sort of like the Gospel According to Lenny Bruce."

The pudgy kid quipped, "So maybe Communion wafers should have a slice of pepperoni and some mozzarella sprinkles on top?"

"You sound like some kind of a prophet!" the girl said reverently, gazing at him dreamily with wide eyes. He reached out and touched her soft, delicate hand with his sweaty paw.

"This has got to stop," replied Karl. "What if he breeds?"

About the Series: Space Vixen Trek

Space Vixen Trek is all about making science fiction (and sometimes fantasy) as cheesy as possible, and as fun as possible. There's always a nerd and a jock, and sometimes their pals along for the ride. They save the world from icky aliens. What's there not to love about that? I'll often parody a particular genre, or pretend to write from a certain time period 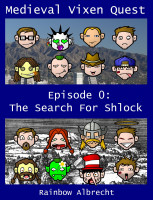 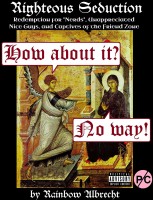 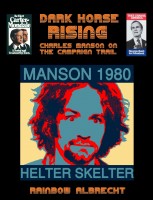 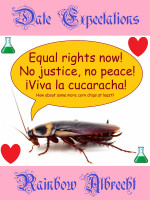