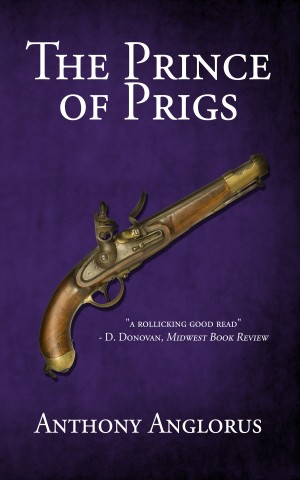 The Prince of Prigs

By Anthony
Rated 5.00/5 based on 1 review
Will James Hind steal your gold or your Heart? Maybe both! Set during the English Civil War, follow the adventures of James Hind and his Robin Hood-like antics as he does his part for Crown and Country. More
The union of England and Scotland under one crown is not even a half century old, and the Parliamentarians already threaten the very fabric of the nation. These are the adventures of highwayman Capt. James Hind who, in Robin Hood fashion, steals from the Roundheads to help fund the royalist cause. When Cromwell comes to power, James, the Prince of Prigs, must be careful whom among his treacherous “friends” he trusts.

Praise for Prince of Prigs:
Any who view historical fiction as dry or plodding should pick up The Prince of Prigs: it wraps courtroom drama, social issues, flamboyant personalities and British politics under one cover and represents a rollicking good read even for audiences who normally eschew the genre. As for those who know how compelling it can be - The Prince of Prigs is ample evidence of the powers of historical fiction. - D. Donovan, Midwest Book Review
Available ebook formats: epub mobi pdf rtf lrf pdb txt html
First 10% Sample: epub mobi (Kindle) lrf more Online Reader
pdb
Price: $3.99 USD
Buy Add to Library Give as a Gift
How gifting works
Create Widget
Tags: robin hood english civil war highwayman swashbuckling adventure restoration england fiction english 17thc history
About Anthony

After over forty years working as an accountant, I took up the pen in 2010. I had spotted an interesting character in the history of one of the towns I had worked in, and upon researching him, found him to be fascinating. So I started writing, and became addicted. The words flowed so fast I was barely able to keep up. 'The Other Robin Hood' is the outcome, although the finished product is very different to the first draft!
What next? Well, I do have the outline for a sequel, but also I am reviewing a tome I wrote almost 20 years ago to see if it warrants 'cleaning up'. I have additionally identified another fascinating Highwayman from history about whom I am constructing a timeline with a view to a fairly lengthy dramatisation of HIS life.

Reviews of The Prince of Prigs by Anthony

With a good mix of fictional elements, amusing, and sometimes callous dialogue, two Royalist officers-turned-highwaymen (post English Civil Wars) are again riding the highways and byways of England. Their rebel rousing thus committed during the years of The Interregnum (Cromwell’s reign) 1649 -1658 is revealed by way of individual scenarios and cameos, which eventually bring the two highwaymen into contact with one another. What transpires from the crossing of their paths makes the Prince of Prigs a thoroughly enjoyable and discomfiting read – latterly in respect of a heinous crime. But when a novel is based on true accounts, grit and grime cannot be glossed over to render all highwaymen as heroes, because some were indeed villains of the worst kind.

Nonetheless, Capt James Hind, the son of a saddler, no doubt had a greater understanding for those less endowed financially, and he duly became a bit of a latter-day Robin Hood. The author admirably presents James Hind, the young man born in a Cotswold township of Chipping Norton, as a true gentleman Royalist rogue. For throughout his quest to relieve supporters of the ruling Parliamentarian cause of gold, silver and any item of substantial value, Capt J. Hind never killed a soul, albeit he humiliated and ridiculed one or two.

On the other hand, Capt Zachary Howard (Royalist), once a man of considerable means amounting to an estate that averaged an income of 1,400 pounds a year in Gloucester, is sorely vexed at having had his property sequestered by Parliament. He therefore determines to not only enact revenge against the regicides for the death of his king, he’s equally determined to exact personal scores against those whom stole his property and lands for self or as payment in kind to other Parliamentarian officers. It could be said Howard had a far larger axe to grind against the Parliamentarian generals than did Capt James Hind. Indeed, Capt Zachary Howard not only committed foul deeds he carried out a most heinous sexual crime, one that would eventually bring about his downfall in the very same year Capt James Hind was betrayed and taken into custody. That part of their stories I shall leave the author to enlighten upon at a later date— no doubt within a follow-up novel!

You have subscribed to alerts for Anthony.

You can also sign-up to receive email notifications whenever Anthony releases a new book.