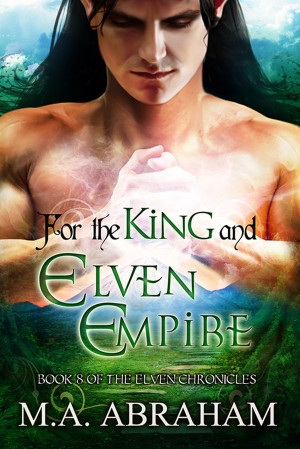 For the King and Elven Empire

At Gabriel's command, the Kings and Queens lead their armies into the High Elven Kingdom, but it is not Gabriel who will take command; it is Lothrariel. He has regained his ancient powers and searches for answers, but a power as ancient as his has hidden the answers. Who has done this? Why?
With their parents away, the children of the Light Elven Kingdom work behind the scenes to regain the freedom of their friends. There is only one Elf who can reach the children where they are; S’Larea. When they are finished, will the High Elven Kingdom be the same?
Available ebook formats: epub mobi pdf rtf lrf pdb txt html
First 5% Sample: epub mobi (Kindle) lrf more Online Reader
pdb
Price: $3.99 USD
Buy Add to Library Give as a Gift
How gifting works
Create Widget
Tags: romance fantasy elf eden gabriel m a abraham elven chronicles marious elven empire for the king and elven empire
About M.A. Abraham

About the Series: The Elven Chronicles

The Light Elven King Daroth has senl Gabriel Eagle Claw out into the world to collect his bride and those that surround her. For Gabriel, this is another task. The last thing he expects is to meet his own Life Mate, a pretty Tratchar called Eden.

A 21-book series following the journey of various Elves from all Kingdoms from a time of peace to fight an enemy that refuses to give in until every Elf is dead. The Elven Chronicles tells of how they lived, lovde and raised their children to follow the light. As more Kingdoms come to light as the veils that separates them are brought down, bringing back the might of the once powerful Empire.

Caged in darkness through many millenniums, The Drazon feels the bars of his prison weaken and he sends his minions out to weaken the Elven army. Time and again, he fights the might of the leaders of their world, but the Kings are strong in their unity. Slowly it builds and as his Demon Hordes swarm over Elven lands to face the might of the Empire, the Drazon escapes to wreak havoc. Which side will win when they meet for one final battle?

Also in Series: The Elven Chronicles

Reviews of For the King and Elven Empire by M.A. Abraham

You have subscribed to alerts for M.A. Abraham.