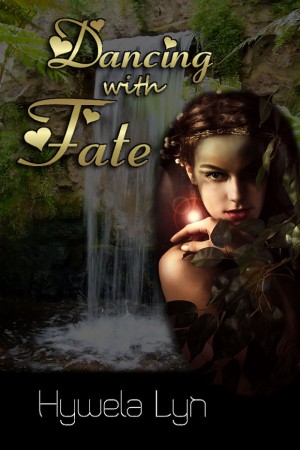 By Hywela Lyn
Rated 5.00/5 based on 4 reviews
When Terpsichore, Greek Muse, becomes involved with a mysterious figure from another time and place, the Fates lead her on a merry dance. The life of her one true love, and the future of a legend hang in the balance.

(Contains mild adult content) More
When Terpsichore, the Greek Muse of Dance, is assigned to revisit 5th Century Wales, and help the people regain their love of dancing, her task seems simple enough. She is unaware there is a hidden agenda. Before she can return to Olympus her path crosses that of the mysterious Myrddin, and her heart is lost.

But Myrddin is promised to another. His mind is set on the dangerous task that lies before him, and the woman he has sworn to save. Nevertheless, he cannot deny the growing attraction between him and the beautiful stranger he meets along the way.

Hywela Lyn (usually known by her second name Lyn) writes fantasy and futuristic romance. Although she was born and lived most of her life in rural Wales she moved to a small village in England when she married, although her dream is to eventually move back to her native land.

She loves the countryside and all animals She is pet parent to T'pau, a sweet but feisty mare, a 'ferel' cat who does the mousework at the stables, and a rescued terrier called Choccy.Harri, her black Welsh Cob, and Sal, her little endurance mare, who sadly have passed over the rainbow bridge, both feature in 'Dancing With Fate.

Lyn has three futuristic novels published by The Wild Rose Press, in print and EBook format, as well as being available to listen to on Audible, and has been published in several UK magazines and periodicals, including 'The Lady'.

Reviews of Dancing With Fate by Hywela Lyn

A loving mix of legends that will whisk you away

I’ve never treaded along a path like this before and thank the author for shining the light There’s a secret here. The author not only has a deep love for Welsh folklore and the land itself, but a command of Greek mythology made real for me for the first time. Thus, Myrddin and Terpsichore, were destined to meet and fall hard for each other. Hywela Lyn will keep you guessing right up to the last page. I loved this story with an inspired mix of Arthurian and Greek legends.

(reviewed the day of purchase)
Aubrie Dionne reviewed on June 28, 2011

The Celts’ spirits are down from battle, and Apollo asks Terpsichore, the muse of dance, to return to Earth and inspire them. She must forgo her powers and roam among the people as a mortal woman, trying not to be noticed. But she is noticed, for the Gods have secret plans.

When Terpsichore, known as Cora on Earth, finishes her task, she decides to swim in a mountain spring in the forest. After drinking a sip of enchanted wine, she loses herself in dance and song. Her nude dance by the spring captivates a man named Myrddin, who invites her to share his evening meal.

Terpsichore is drawn to Myrddin. Although he is human, there is something special about him, and she longs to get to know him better. She accepts his offer and joins him for dinner. At dinner, she learns he is on a quest to save his betrothed. Both of them hold secrets from each other, and only time will draw them out.

Little does she know the Gods have plans for her, and the stakes are high.

Sweet Terpsichore may be immortal, but she has the same feelings and urges as any woman, and I wanted her to find happiness with Myrddin. With poetic prose and sizzling romance, this story is a must read for mythology and fantasy fans alike.

(reviewed the day of purchase)
Romy Gemmell reviewed on June 2, 2011

Beautifully written with highly visual scenes, you'll be transported to a world unlike any other. I urge everyone to read this story and learn the "fate" of a well-known character who you'll never imagine in any other way again!

You have subscribed to alerts for Hywela Lyn.

You have been added to Hywela Lyn's favorite list.

You can also sign-up to receive email notifications whenever Hywela Lyn releases a new book.