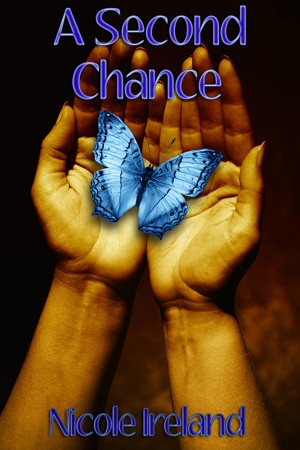 Rated 4.67/5 based on 3 reviews
What if you discovered you only had months to live? How would you tell your children, your husband, your parents? Would you even tell them at all?

When faced with the devastating news that her cancer treatments failed, Annabelle Dixon does what many terminally ill people do: she prays for a second chance. But will she get one?

A Second Chance is the debut novelette from author Nicole Ireland

Nicole Ireland is an author and freelance writer from southern Maine. Over the past few years she has written for several companies, including Mahalo, Demand Studios, and Break Studios, to name a few. Currently, you can find her on MySpace as the Reality TV Curator.

In addition to freelance writing, Ms. Ireland is also a virtual assistant and compliance coordinator for a pizza dough production company located in southern Maine. Her main duties include maintaining the company’s HACCP and OSHA programs.

On April 12, 2011, Ms. Ireland published her first novelette, A Second Chance, via Smashwords and Amazon.

Review
GoPassion Press reviewed on May 2, 2011

When I started reading Second Chance, my first thought was “here we go, another cancer book, another life after death novel” Ho-hum I have read it all before. How is this book going to be any different?

Then, there are us readers. Those who believe that it is possible for someone to cross over, meet their maker, and then return. Others have nothing of the sort running around inside their brain.

Stories like “Second Chance” are really going to ask you whether or not you believe in situations such as these.
Before I go any further, I do not want there to be any confusion. We have all seen incidents in the past where fellow writers are seen chit-chatting on social media sites and their personal website and a few days later up pops a book review and someone has to make a comment regarding fellow writers doing such thing.

Yes, I know Nicole, the author. No, I do not know her personally. Meaning, I don’t hang out with her outside of the internet world. Although, I would. She seems really sweet and we seem to have a lot in common. Would I consider her a friend? Yes. A co-worker sums it up well too and fellow writer. Nicole is not asking me for a review. I made the choice to do it after I purchased my copy. I support my fellow writers and when she announced its launch, I knew I had to read the final product having followed along on the journey to submission. I saw others were passing along reviews and I thought it would be helpful to her if I did one as well.

Now that these things are out of the way, I have to admit I am torn over this story.

While I loved the story itself, the characters, and the plot, I felt the story lacked a little something more. I know firsthand how hard it can be to say everything you want to say without overloading an ebook short story, but I wish there was more. Maybe not so much more length in plot but more depth or volume to the characters and story itself. I almost felt as if the author was playing it safe, and I know she is a much better writer than she is letting us see.
This has nothing to do with the story itself, or even grammar. I don’t want to scare anyone away from purchasing this book.

We meet Annabelle, losing her battle with cancer. There are her parents, the loving husband, and their children. I would have loved a bit more detail to the back stories provided and more in-depth detail to the current events. There were times I could sense what Annabelle was feeling, and the pain everyone else was going through, but little else. When I read a story, no matter how short or long, I want it descriptive so I can transfer myself into the world of the words I am reading. I want to touch, smell, and even taste whatever is going in within the pages of the book.
(I hope that makes sense.)

Having said all of that, I do give Nicole 5 stars because the story is captivating and beautiful. It will pull at your heart (be sure to grab a tissue when you sit down to read), and I can see some people turning their life around after reading it. Life is too short. Don’t wait until you are handed your death sentence before you start making changes. Make your changes now.

I believe everyone deserves a Second Chance. Having watched so many people around me lose their battle with cancer, I can only wish one of them would have been given a second chance.

I am also thinking it would be nice to read about Annabelle and what she does with her second chance in life.

I really recommend this book to anyone, not just those who are connected to cancer somehow, but to everyone because there are lessons to be learned from stories like this.

I was fortunate enough to receive a free e-copy of Nicole Ireland's A Second Chance. Let me tell you people, you have to read it. The emotional intensity of the writing had me in tears throughout half the novel. (I'm sorry to say that if it scares anyone away). Despite the tears, it's an amazing, well written novel that deserves a LOT of love! (Don't mind me, I'm an easily emotional mom of two.)

Having read this right after reading Dream Smashers by Angela Carlie, I've had a very emotional week in the reading world. Also, having just read Dream Smashers, I have to say that A Second Chance falls in the same stellar category. It's very real, very beautiful, very powerful. It's yet another read that should not be missed!

5 STARS and 5 TISSUES go to this amazing novel!

A truly beautiful, heart-felt story. Even young women who have never had to face cancer, can relate to what it would be like if they were faced with the idea of their own mortality and what they would do to prepare their loved ones. Not a single person could read this story without shedding a few tears.

Great for the Soul & Worthy of the small amount of time to read.

You have subscribed to alerts for Nicole Ireland.

You have been added to Nicole Ireland's favorite list.

You can also sign-up to receive email notifications whenever Nicole Ireland releases a new book.