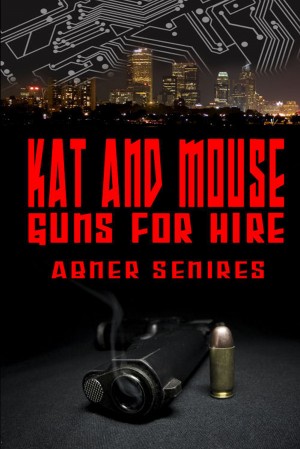 Kat And Mouse, Guns For Hire

By Abner Senires
Rated 3.00/5 based on 1 reviews
When female mercenaries Kat and Mouse take on a series of seemingly easy jobs, the last thing they expected was everybody in Bay City's underworld to come gunning for them.

Now these sassy sisters-in-arms must survive the onslaught of biker gangs, corporate cyborg commandos, and a Japanese crime syndicate and still get the jobs done.

Because in the Biz, it's get paid or get dead.

"You read this book because it's fun." --Science Fiction and Fantasy Review

Buckle up for an adrenaline-fueled, thrill-packed ride into the near-future in this cyberpunk pulp noir extravaganza.

When female mercenaries Kat and Mouse take on a series of seemingly easy jobs, the last thing they expected was everybody in Bay City's underworld to come gunning for them.

Now these sassy sisters-in-arms must survive the onslaught of biker gangs, corporate cyborg commandos, and a Japanese crime syndicate and still get the jobs done.

Because in the Biz, it's get paid or get dead.

"...action-packed...If you like adrenaline-pumping, gun-toting bounty hunters, this is...for you." --Frances Gonzalez, author of THE LIGHTHOUSE CHRONICLES: DIAMOND DUST

Abner Senires writes sci-fi pulp adventure and has been published in Anotherealm, Neverary, Pulp and Dagger, and millenniumSHIFT, among others.

He lives in just outside Seattle, WA with his wife and a pair of rambunctious cats.

About the Series: Kat and Mouse, Guns For Hire Omnibus

Chronicling the pistol-packin', sword-swingin', two-fisted adventures of cyberpunk mercenaries Kat and Mouse as they navigate the mean streets of Bay City.

Also in Series: Kat and Mouse, Guns For Hire Omnibus

Kat is the dark-haired Amazon in black biker leathers with a pair of .45-caliber hand cannons named Bonnie and Clyde. Her partner, Mouse, is the dame in the trenchcoat wielding the Japanese short swords. This book features 14 episodes of their pulp action adventures from the Kat and Mouse webserial.

The writing style is fast, fun, and minimalist with a hardboiled aesthetic. It’s a thrill ride as the sassy duo shoot and slice their way through mooks in Bay City. The fight scenes are fantastic; Senires doesn’t get bogged down with explaining the cyberpunk weaponry as he leaves the best stuff to the imagination:

[Twenty meters before the onramp, the aerodyne dropped out of the sky right in front of us, a three-meter long, gray metal brick suspended in mid-air by four ducted vectorthrust engine pods. Its chin-mounted 30mm chaingun swiveled toward the Shelby’s windshield.

[The muscle went for their guns.

A subvocalized command flooded my body with adrenaline stimulators and the world slid into slo-mo.]

The characters are lively and interesting. They’re based off familiar types (slice-happy sidekick, support guy with Cockney accent, broken-English Russian barkeep), but they’re instantly likeable and their interactions give off Joss Whedon vibes. The cast has a dynamic that works well, and I can see myself continuing to read the series for them.

While the writing and the characters are excellent, the world of Bay City and the episodic stories themselves need either more meat or flavour. Bay City is a standard big city with turf wars. It has a cyberpunk aesthetic as far as weapons and tech goes, but it isn’t different from a gang-ridden city of today. The gangs and joyboys are cute, but they’re run-of-the-mill Italians mafiosos and punks in biker leathers. There are punks in red leathers, but that’s as colorful as it gets. I would love for Senires to make Bay City and its groups more unique and theatrical.

Some repeated information could be removed from the ebook edition. The episodes are standalones, but I found it distracting to be reintroduced to the cast half a dozen times. I wish there’s more meat to the episodic stories themselves. I love reading frivolous pulp stories, but the ones here didn’t grab me. I’m happy to read such stories if they’re compensated with extra sensationalism, but Kat and Mouse doesn’t push the envelope far enough.

Kat and Mouse is an entertaining read and I can see myself following their future adventures. I could easily give it more stars if it has a bit more sensationalism or substance in the story and world-setting department. There’s a lot of great stuff here so I’m following Senires to see where he takes the series. While this review is critical in some respects, it’s also a review from a potential fan in waiting.

I recommend this book if you’re looking for some light pulp action fun with a cyberpunk/hardboiled aesthetic. It’s an enjoyable read as long as you don’t expect much else.

Note: a free review copy was provided by the author.

You have subscribed to alerts for Abner Senires.

You have been added to Abner Senires's favorite list.

You can also sign-up to receive email notifications whenever Abner Senires releases a new book.