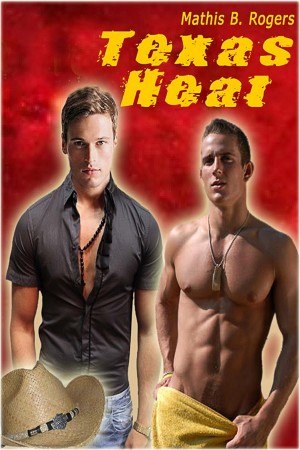 By Mathis B Rogers
Adult Erotica

Rated 1.00/5 based on 1 review
Just out of the Navy, Blain Bailey moves to Cactus Bend in the heart of West Texas, where his parents have recently moved from Amarillo. Blain has always considered himself straight and, although he is still a virgin by choice at 26, as he tries to grow accustomed to the desert climate, there is more causing his blood to boil than just the Texas sun. This eBook contains Adult content.
Available ebook formats: epub mobi pdf rtf lrf pdb txt html
First 15% Sample: epub mobi (Kindle) lrf more Online Reader
pdb
Price: $4.99 USD
Buy Add to Library Give as a Gift
How gifting works
Create Widget
Tags: friendship coworkers attraction
About Mathis B Rogers

Mathis B. Rogers was born in Shamrock, Texas, and was raised all over the Texas Panhandle and South Plains of West Texas.
He began writing when he was thirteen and while working the Night Audit (graveyard shift) for motels, he was able to be very prolific. Mathis enjoys writing and when someone asks him how to write, he replies, "It's just daydreaming and writing it down."

Reviews of Texas Heat by Mathis B Rogers

when i buy a book in the "gay erotica" category, i expect it to feature gay characters, and some form of sex between them, or at least major amounts of heat. and unless i know it's erotica written by men for men who're mostly looking for wank material, i also expect a HFN or HEA ending. this book has none of the above. the protagonist swears he's not gay, and while that's usually the preamble for a gay-for-you story, or an admission that ok, so he might be bi, here it isn't. there's no sex, just a few hard-ons and kisses, and they're not particularly erotic. there's no happy ending, and not even a Happy-for-now; he still wants to marry some girl who is a virgin, and doesn't get involved with the guy he's attracted to even though that guy is attracted to him. i'd give it more than one star if the story were otherwise interesting, but it reads like a boring diary of a boring person. there's no self-reflection, no thought about why he's attracted to the other guy, why in fact all his close relationships are with guys, and what that might mean; he just plods on with the same nebulous goal. blain's blood doesn't boil; it barely moves. there's also no pacing to the story -- which in retrospect almost makes sense since nothing happens in it, so what would we be pacing ourselves for. instead we spend a lot of time on details about feeding livestock on a farm (and don't tell me they really use hay for bedding in texas instead of straw), on workouts at the gym, and blain buys a computer, yay.

You have subscribed to alerts for Mathis B Rogers.

You have been added to Mathis B Rogers's favorite list.

You can also sign-up to receive email notifications whenever Mathis B Rogers releases a new book.